Flaaffy (モココ, Mokoko in original Japanese language versions) are one of the 493 fictional species of Pokémon creatures from the multi-billion-dollar Pokémon media franchise – a collection of video games, anime, manga, books, trading cards and other media created by Satoshi Tajiri.

Flaaffy is a portmanteau of "fluffy" and "baa" (the onomatopoeic sound made by a sheep). Its Japanese name is a corruption of the word meaning fluffy (もこもこ, mokomoko).

Flaaffy's wool quality changes as it matures so that it can generate a high amount of strong static electricity while still having a small amount of wool. Its bare, electric-resistant, parts of its hides enable it to prevent electrocution. As a result of storing too much, it developes patches even where wool won't grow.

Flaaffy is dark pink in color. Its fleece is white, and it grows over the top half of its body and its head. It has black stripes on its ears and its long tail, and it has small, beady eyes that look like black dots. It has a blue ball on the tip of its tail. Flaaffy usually likes to sit upright, although it can stand on two legs if necessary.

In Pokémon Colosseum, a Shadow Flaaffy can be snagged from Street Performer Diogo in Pyrite Town. Otherwise, Flaaffy evolves from Mareep at level 15, who is available in Pokémon Gold, Silver, XD and Emerald.

Flaaffy has made few appearances in the anime, the first instance was in the movie Pokémon 3 where it was created from Molly's dreams to fight Brock's Pokémon. It didn't make an appearance again until a Master Fisherman used one named "Hannah" against a Zubat. Unlike the gentle image that's usually portrayed by most Flaaffy, Hannah seemed very fierce in the battle. A third appeared along with its other forms, Mareep and Ampharos. In this episode, it became the love interest of Brock's Marshtomp, which had evolved just earlier in the episode.

In Volume 10, a Flaaffy is seen with a Dunsparce stranded on Bill's boat. 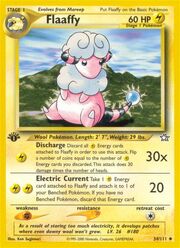 Flaaffy has made several appearances in the TCG. All were as an electric stage 1 Pokémon unless otherwise stated. Flaaffy appeared in the following expansions: