Flareon (ブースター, Būsutā, Booster in original Japanese language versions) is one of the 493 fictional species of Pokémon creatures from the Pokémon media franchise created by Satoshi Tajiri. Its main purpose in the games, as with all other Pokémon, is to battle both "wild" Pokémon, untamed creatures encountered while the player passes through various environments, and "tamed" Pokémon that are owned by Pokémon trainers.

Flareon's name is derived from flare, a sudden burst of fire that serves as a strong light source. Its Japanese name may refer to rocket boosters, which propel things by combustion of fuel. The -eon suffix is common to, though not exclusively shared by, all names of Eevee evolutions.

Flareon are a quadrupedal species that bear physical traits of foxes, though it also has more characteristics of rabbits than any other Eevee evolution. It especially bears resemblance to the red fox. It falls into the height and weight range of the gray wolf. Flareon's head, ears, torso, and legs are covered with short, red-orange fur, while large tufts of yellow fur are found between its ears, and around its neck and tail. The coloration of its fur causes many to remark that it resembles fire.

The Pokédex states that Flareon are able to store amazing amounts of heat in their bodies. Although their fluffy fur helps to give off excess heat by directing it along the hairs and away from the Pokémon, their body temperatures may still reach or even exceed 1,650 °F (about 900 °C). When they use this heat for Fire-type attacks, the fire can reach temperatures of nearly 3,100 °F (about 1705 °C). Flareon launch fire attacks from an internal "flame sack". When they are not in battle, it is possible to touch a Flareon without getting burnt, despite its internal heat.

Flareon cannot be caught in any of the Pokémon games. It must be evolved from an Eevee with the use of a Fire Stone.

Flareon's highest stats is its Attack, and also has good Special Defense and Special Attack. Flareon has a generally limited movepool and thusly, cannot counter most of its weaknesses. Flareon's lowest stat is its Defense.

The Pokémon anime series and films are a meta-series of adventures separate from the canon that most of the Pokémon video games follow (with the exception of Pokémon Yellow, a game based on the anime storyline). The anime follows the quest of the main character, Ash Ketchum—an in-training Pokémon Master—as he, and several other companions) travel around the fictitious world of Pokémon along with their Pokémon partners.

Flareon's first appearance in the Pokémon anime was in Episode 40, The Battling Eevee Brothers!. In this episode, Ash's party comes upon a family of four brothers who all have Eevee evolutions. The three older brothers have Flareon, Jolteon, and Vaporeon, and they are pressuring their youngest brother Mike to evolve his Eevee, too. What they fail to notice is that he doesn't want to. When Team Rocket steals all of the Pokémon, however, Mike proves that his Eevee doesn't need evolving by beating Team Rocket when his brothers' Pokémon couldn't.

In Episode 56, The Ultimate Test!, Ash participates in the Pokémon League Admission Exam, part of which is battling using random Pokémon. Ash ends up using a Weezing while battling a Flareon, which he wins against because the Weezing's Smog caused an explosion when hit by Flareon's fire.

In Episode 185, Trouble's Brewing!, a family of sisters in Ecruteak City, like the Eevee Brothers in Episode 40, are trainers of most of the different Eevee evolutions, including Eevee, Vaporeon, Jolteon, Flareon, and Umbreon. These Pokémon help in fighting off Team Rocket. These same Pokémon reappear, with Eevee having since evolved into Espeon, in Episode 228, Espeon Not Included!, when Team Rocket kidnaps all of them. The Pokémon end up being rescued by Ash's party with help from the Espeon and its trainer.

A young male trainer trying to catch a Magcargo has a Flareon as his only Pokémon in Episode 242, Some Like It Hot!. In Episodes 353 and 354, a Pokémon Coordinator named Savanna/Tsukiko had a Flareon that she used in Pokémon Contests and to help train May's Bulbasaur.

Red temporarily controls a Flareon, which is actually his Eevee switching between its evolved forms. 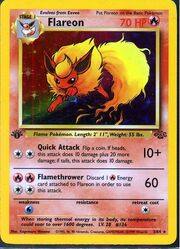 The Pokémon Trading Card Game is a collectible card game similar in goal to a Pokémon battle in the video game series; players must use cards (with individual strengths and weaknesses) in an attempt to defeat their opponent by "knocking out" all of his cards.[1] The game was first published in North America by Wizards of the Coast in 1999, until Nintendo USA started publishing the series in 2003.[2]

Flareon, like all Eevee's evolutions, has a rather strong abundance of cards under its name. It has made all the following appearances: