Fonz is a 1976 arcade racing video game developed by Sega and published by Sega-Gremlin. The game was based on the hit TV show Happy Days and the slogan was "TV's hottest name, Your hottest game." The game itself was simply a rebranded variant of Sega's earlier 1976 game Moto-Cross in a customized arcade cabinet.[1] Sega was allowed to rebrand their game as Fonz because its American branch at the time was owned by Charles Bluhdorn's Gulf+Western Company and thus had access to Paramount Television's intellectual property.

Moto-Cross / Fonz was an early black-and-white motorbike racing game, most notable for introducing an early three-dimensional third-person perspective. Both versions of the game displayed a constantly changing forward-scrolling road and the player's bike in a third-person perspective where objects nearer to the player are larger than those nearer to the horizon, and the aim was to steer the vehicle across the road, racing against the clock, while avoiding any on-coming motorcycles or driving off the road.[2][3] The game also introduced the use of haptic feedback, which caused the motorcycle handlebars to vibrate during a collision with another vehicle.[4]

The game was also notable for its use of a tape deck to producing streaming video game music. [2] 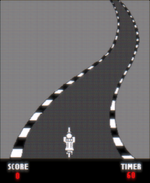 The general premise was the player controlled the Fonz on a motorcycle with handlebars on the cabinet.

The player had to go as fast as possible without skidding off the road or colliding with other racing bikes on the screen. Turn the handlebars, and the bike would corner and bank. Twist the handle throttle open, and it would accelerate. When a collision with another bike occurs, the handlebars vibrate and the screen flashes a reverse image. To increase the challenge, the size of the bike can be regulated by the operator.

Game time is adjustable from 45 to 100 seconds.