Forretress (フォレトス, Foretosu, Foretos in original Japanese language versions) are one of the fictional species of Pokémon creatures from the multi-billion-dollar[1] Pokémon media franchise—a collection of video games, anime, manga, books, trading cards, and other media created by Satoshi Tajiri.

This Pokémon's name is a deliberate misspelling or combination of fortress and/or forest, referring to its tough steel exterior.

Forretress's exact appearance is unknown, because it is almost entirely encased in a hard shell, through which only two round, beady eyes can be seen. The shell itself is comprised of two parts: inner and outer. The inner shell is brick red and features four protrusions that look like small cannons. The outer shell is gray and pockmarked, like the surface of the moon. Forretress's appearance also resembles a walnut, or to a lesser extent, an oyster, or other bivalve. Forretress is usually found hanging from a thick tree trunk, hardly moving at all. It conceals itself inside a very hard steel shell, which might be created by the leaves it keeps wrapping around itself during its time as a Pineco.

The shell itself has more than one layer, and each layer possesses different functions. Apparently, the 'steel' coating is separate from the red part of the shell. The two halves of its outer shell can swivel and close down to interlock with each other to provide further protection. The four tubes that extend from the shell can be retracted, showing that they are not actually a part of the shell. This is usually used when they close the steel outer shell completely.

Forretress opens its shell only when it is catching prey, but it does so at such a quick pace that it is impossible to discern the nature of what lies inside, much less attack it while it is unprotected.

Forretress can also use the shell for offensive purposes. It has the ability to shoot out bits of its shell in response to threatening activity near it, in an effort to drive foes away. This seems to be the basis behind its Spikes attack, which scatters caltrops all over the battlefield.

Forretress can be Snagged in Pokémon Colosseum in the Shadow Research Institute. Otherwise, it can only be obtained by evolving Pineco at level 31, meaning that Pineco's availability dictates the availability of Forretress. It can also be found in Pokémon Gold, Silver, and Crystal, after evolving a Pineco. Before, Forretress wasn't able to learn a decent Bug or Steel types moves but in Pokemon Diamond and Pearl, it can learn moves like Gyro Ball or U-Turn, giving it type-related maneuvers.

Forretress is one of Brock's Pokémon in the Pokémon anime series. It evolved from Pineco in episode #261, "Entei at Your Own Risk". It has the distinction of being the only Pokémon that Brock took with him when he set out for the Hoenn region, leaving all others at the Pewter City Gym. However, he has since used his latest acquisitions (Mudkip and Ludicolo) much more often.

In the Pokémon Special manga, Forretress first appeared in Volume 9, where Red had to fight two to pass his aptitude test to be Viridian City's Gym Leader.

Another Forretress was seen in Volume 11, under the ownership of Janine. She used its Spikes attack to lay traps for unsuspecting victims. 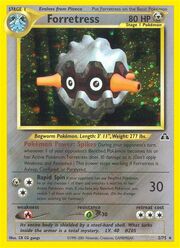 Forretress has made many stage-1 appearances in the Pokémon trading card game, blending both Grass-type and Steel-type qualities: