Forza Motorsport is a Racing Simulation game for the Xbox. It offers over 230 models of cars from over 50 manufacturers. Frequently compared to Gran Turismo 4, it is known for its realistic physics, and its Drivatar AI, which you can train and use to race for you in career mode. 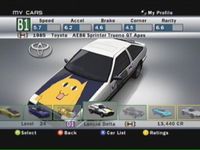 It is also known for its Decal mode, which allows you to make your cars as unique as you want them to be using basic geometric shapes, numbers, and some pre-designed decals. These personalized vehicles can then be copied to other's cars of the same make and model or sold via Xbox Live.

Forza includes many modes of play to choose from, most notably its robust Career Mode. Also present are its Arcade Mode, Decal Mode, and multiplayer via split-screen, system link, or Xbox Live.

Forza's 'Career Mode' begins by having you pick a region from Europe, Asia or North America and a starting vehicle from that region. As you progress through the game and win races, you will accumulate credits, Forza's currency, for placing in the top 3 in races, the difficulty of the race, and the rarity level of your car. These credits go towards your driver level, much like in Project Gotham Racing, and as you accumulate credits and levels you will earn new races, cars, and sponsorships from manufacturers. Forza sports a host of different events to race in, each with their own unique requirements. Such events include the "Ultra Heavyweight" event, open only to cars weighing in at more than 3,850 pounds and the "Classic Sports" cup, open to unmodified cars made prior to 1975. These events can have you racing against the competition point-to-point, in a championship-style setup, on one track in a string of separate races, or for long periods of time on one course in the endurance mode.

'Arcade Mode,' much like the one present in the Gran Turismo series, essentially has you competing in races based on the class of your car. Car class is an integral part of the Career Mode of Forza, as well, and essentially dictates either the level of performance a production car car is capable of relative to the other cars in the game, or, for the racing-vehicles, what purpose or class of racing they were built for. Such classes (ranging from D4 to S1 for production cars and from GT to P1 for racing vehicles) bear restrictions on what races each car can enter in Arcade Mode.

'Decal Mode' is a mode unique to Forza, and also one of great importance to the overall value of the game. Separate from the tuning aspect of Forza, Decal Mode allows one to greatly alter and personalize the paintjob of their cars. The toolkit for Decal mode is a relatively straightforward, vector-imaging style of design, which has you using assorted preset shapes, numbers, logos and designs to customize your vehicle. Using the array of shapes and designs provided, it is very easy to emblazon complex and detailed images onto your car. Once you have a design that is to your liking, you can show it off or sell it to others through Xbox Live.

A feature for Forza Motorsport, Drivatars are created by racers and will monitor you as you take practice laps around courses in Drivatar mode. You are graded on your performance through various corners on said courses on a scale from 1 to 100%. After you complete some basic sets of laps in an assortment of different cars, your Drivatar becomes eligible for racing situations, allowing you to have it race for you at the cost of some of your prize money, and the option to train it freely on any course with any car becomes available.