He is the current leader of the space mercenary team known as Star Fox, which was founded by his father, James McCloud. His rival is Wolf O'Donnell of Star Wolf team. His voice actor varies by game, but have included Dan Owsen, Mike West, and Jim Walker.

Fox is usually seen in his Arwing, however, games such as Star Fox Adventures show him exploring planets on foot, as opposed to vehicles. According to Star Fox Assault, he is not the best Arwing pilot, but more of an all-around fighter. He is also the only one the team sends to drive anything else, like the Landmaster.

Fox is one of the original starter characters featured in Super Smash Bros. His appearance is based off of his look in Star Fox 64. Fox is one of the more versatile fighters - he has a projectile, a reflector, decent recovery and fast movement speed. When fought in 1P Mode, he will fight the player on his home stage, Sector Z.

He is voiced by Shinobu Satouchi, his voice actor for the Japanese version of Star Fox 64.

Fox returns as a starter character in Super Smash Bros. Melee. His move set remains almost identical to his 64 counterpart, with the addition of a new special move, "Fox Illusion", as well as the reworking of his aerial attacks. He is widely regarded as one of the top competitive characters in Melee, ranking #1 on both the US and EU tier lists, due to many different factors. Sector Z was removed in Melee, changing Fox's home stage to Corneria.

Fox returns as a starter character in Super Smash Bros. Brawl, his move set remains largely unchanged from Melee. As with all characters, Fox received a personalized Final Smash that allowed him to summon his Landmaster on the stage, which could be controlled by the player.

Fox was voiced by Jim Walker in the English version of Brawl, and Kenji Nojima in the Japanese version. 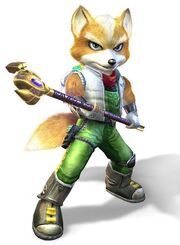