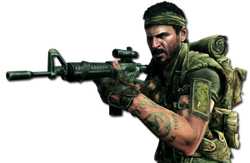 Sergeant Frank Woods was one of the main non-playable characters in Call of Duty: Black Ops. Woods was part of the Studies and Observation Group. On Woods' left arm is a USMC tattoo, which suggests his branch of service.

Woods was born in Philadelphia, Pennsylvania. He served in the US Marine Corps, during which he had much combat experience fighting in the Korean War. This gained him a reputation that led the CIA to recruit him for their Special Activities Division.

Woods is first seen in a Cuban bar with Mason and Bowman talking to Carlos in Operation 40. Woods talks to Carlos about the location of Castro. Suddenly the police arrive, and when a Tropas Officer questions Mason, Woods stabs his hand to the table, smashes a bottle across his face, and then executes him. The squad flees to the streets, where the police are waiting for them. The squad fights their way to a car where they escape. We next see Woods at Castro's compound as he, Bowman, and Mason zipline into it. While Carlos and the rebels make the distraction in the air field, Woods leads the raid into the compound. At some point, Bowman splits from the group and continues the search for Castro along the rooftops. Woods and Mason fight their way to Castro's bedroom, where Mason executes Castro with an ASP and either Woods or Mason kill his mistress. Regrouping with Bowman, Woods leads an escape to Carlos's C-130 where Mason jumps off and sacrifices himself for the escape of his squad. Later leading to his capture by Dragovich and Kravchenko, it is here revealed that the Castro they assassinated was a double, and the real Fidel Castro then turns Mason over to the Russians, leading to Mason's 2 year long imprisonment and then escape from Vorkuta.

Woods later leads his team to Baikonur, U.S.S.R on a mission to disrupt the Soviet space program at the Missile Launch Facility, and also to retrieve the captured Weaver. Woods and Mason kill two Russians idling and disguise themselves as the enemy. Woods is somewhat fluent in Russian, as 2 more Russian guards talk to him in their language and he answers back. After being exposed and fighting back, Mason and Woods zip-line and smash through a window.They kill a few Russians and finally save Weaver. They go on to the Auxiliary Control bunker, with hopes to abort the launch. They fight their way to the missile and Mason detonates the room with the scientists in it killing them, but failing to stop the missile. However, Mason uses a guided missile to destroy it. As they can't stay in the open, they move to the tunnels, with plans of still killing the Ascension group. As the mission comes to an end, Kravchenko escapes and there is no sign of Dragovich. It is assumed that he perished whilst inside his Limousine.

Woods returns as SOG's team leader in Khe Sanh, Vietnam, and along with Jason Hudson and Mason, joined the fight against a major assault on the base by the NVA.

In the mission Defector, Woods led the team to Hue City to recover a Soviet defector along with a dossier that would unravel Dragovich's master plan. While they managed to recover the dossier, extraction became a fight for their lives amid a massive assault by the NVA on Hue City.

Following on the intel disclosed by the dossier, Woods led the SOG team to Laos to uncover Soviet's presence there, specifically those concern the Project Nova head by Kravchenko, under order from Dragovich. But it was at Laos, during the mission Crash Site, Woods and the team found the shot-down Soviet cargo plane that carried Nova 6, but were subsequently captured by Kravchenko's men after a firefight.

During Payback, Woods and Mason used the chance when they were forced to play Russian Roulette by the Vietcong to stage their escape. They then proceed to take an Hind from Soviet Forces, and destroy several supply stops for North Vietnamese forces along the way to Kravchenko's Compound. In the final part of mission when Woods and Mason are attempting to kill Kravchenko in his office, Mason was brutally beaten when Woods, sneaking up behind Kravchenko, stabs him in the back. At his last breath, Kravchenko pulls a string attached to the pins of the grenade belt strapped to his body. Thinking quickly, Woods tackles Kravchenko out of the window, apparently sacrificing himself to save Mason as the grenades explode. Woods is presumed dead by everyone, including Mason and later by Hudson and Weaver during their interrogation of him.

In the message of a mysterious informant codenamed "X", Woods is reported as being a prisoner in Hanoi Hilton, though this is unclear as to whether or not this is the truth. The intel information of the mission Payback (after collecting all three pieces of intel in the level), the level that Woods supposedly dies in, shows in the left border the inscription "Hanoi Hilton" (under a photo of prisoners and in the first photo), and talks about a POW camp in Hanoi; this is probably not a coincidence. An interesting thing to note is that the multiplayer map Hanoi is a POW camp, which doesn't have any references to the Black Ops campaign. It may be possible that Woods is a prisoner in this POW camp. All of these possibilities though may be simply coincidental. It is also possible that this is a trap to lure Mason, Hudson, and Weaver there, in order to kill them.