Full Throttle II: Hell on Wheels was to be the sequel to the LucasArts adventure game Full Throttle. It was canceled before completion. 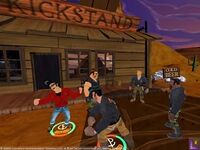 An early screenshot of Full Throttle II: Hell on Wheels.

The game would have been in full 3D, and was rumoured to have featured action fighting sequences in addition to traditional adventure game gameplay. This is one of the many things about the game that made fans of the original uneasy, along with the fact that Tim Schafer was no longer employed at LucasArts and would have no input into the game, and that Roy Conrad, the voice of Ben Throttle in the original, had died of lung cancer in 2002.

Many fans were relieved when the game was announced as cancelled in 2003, as despite their great desire for a sequel, a sub-standard game would not have been a welcome addition to the series.