Furret (オオタチ, Ōtachi, Ootachi in original Japanese language versions) is one of the 493 fictional species of Pokémon in the Pokémon franchise (a series of video games, anime, manga, trading cards and other media created by Satoshi Tajiri).

Its name is a portmanteau of "fur" and "ferret". Furret may also be taken from the Interlingua name for a ferret, "furretto". It's Japanese name is a combination of 大 (, ō), large, 尾 (, o), tail, and 立ち (, tachi), stand. While its preevolution was described as "standing on its tail", Ootachi, however, is much "larger".

Furret is a long, slender ferret-like animal similar to Linoone but with very short paw-like limbs and a body that appears to consist mainly of one giant tail. In fact, it is impossible to discern where its head and body ends and where its tail begins.

Furret live in colonies much like prairie dogs, with tunnels much too small for normal Pokémon to traverse, yet it is a perfect fit for the slim build of Furret as it hides from the outside world at the surface by traversing through these tunnels like gophers. These tunnel colonies become very complex, especially if they are very deep, and can potentially stretch for miles. Occasionally, these colonies are found intertwined with Diglett colonies.

Furret’s rudimentary paws and legs are deceptively nimble, making Furret a quick, unpredictable predator especially skillful at hunting Rattata, its main prey. Also, the fur of the Pokémon is thicker than it appears, and Furret can fluff up its fur to make itself look much stronger and larger than it actually is as an intimidation tactic towards potential foes.

Furret is normally beige with brown stripes. However, a shiny Furret beige skin is light pink and its brown stripes are dark pink.

Furret is mainly obtained through evolution of a Sentret. However, it can also be found wild in Pokémon Gold and Silver in Route 1, and in Pokémon Crystal it can be found in Route 43 in addition to Route 1, all in the morning and afternoon hours. In Pokémon Colosseum, a Shadow Furret can be snagged from Rogue Cail in Pyrite Town.

Furret is used as a supportive Pokémon in 2-on-2 battles, for it can learn both the moves Helping Hand and Follow Me. In all other respects Furret is ignored, due to its somewhat low stats all around (but with good Speed and HP), but in the context of Pokémon Gold and Silver Furret is useful as a Pokémon to battle early in-game trainers because it evolves at a very early level of 15. It also has surprising Technical and Hidden machine compatibility with strong elemental attacks, including Surf and Solarbeam. Its stats prevent it from taking these into full potential however.

On the popular Nintendo 64 game,Pokemon Stadium 2, there is a game called "Furret's Frolic" Where the player plays a volleyball like game, only with pokeballs.

Furrets are kept more for their cute appearance rather than combat ability.

Furret plays a role in the movie Pokémon 4Ever. In it, it is one of the forest pokémon that guides Ash and company towards the wounded Celebi. Furret was also in the short film "Pikachu & Pichu!", episode 268 (A Claim To Flame!), and episode 329 (Game Winning Assist!). Ash's Pikachu battles a strong Furret in Ash's first battle of the Silver Conference in A Claim to Flame. 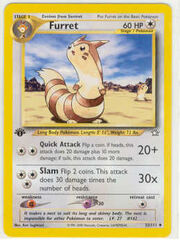 Furret is a rather low-key figure in card format. It has made four appearances as stage 1 Colorless Pokémon: