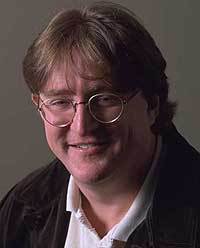 Gabe Newell is the co-founder and managing director of the computer game game development company, Valve Software. Newell is considered to be the public face of the company and a main reason for the success of Half-Life, although during production on Half-Life 2, he spent several months focusing on the Steam project.

Newell, a "Microsoft millionaire" after working 13 years for the company, founded Valve in 1996 with Mike Harrington, another former Microsoft employee. He and Harrington used their money to fund Valve through the development of Half-Life.

As part of his role in public relations, Gabe Newell has become well known for being extremely responsive and helpful when emailed about Valve's projects.