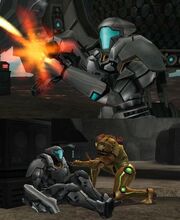 A Galactic Federation trooper. Few NPCs have ever survived a cameo in a Metroid game.

The Metroid instruction booklet supplanted the Encyclopedia Galactica in many places as the standard repository of all knowledge and wisdom in the universe. And it has this to say about the Galactic Federation:

"In the year 2000 of the history of the cosmos, representatives from the many different planets in the galaxy established a congress called the Galactic Federation, and an age of prosperity began. A successful exchange of cultures and civilization resulted, and thousands of interstellar spaceships ferried back and forth between planets. But Space Pirates also appeared to attack the spaceships. 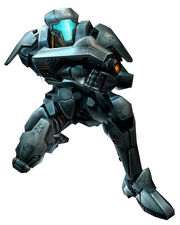 A Galactic Federation researcher watching as Samus throws things at the bane of humanity.
{{{1}}}

While the Galactic Federation was originally written as a utopian government body, recent games paint a more ambiguous picture. Though there has yet to be a plot revelation about the GF acting unscrupulously, they seem to be conveniently around when bad things happen. In the most recent game in the Metroid storyline, Metroid Fusion, Samus discovers the Galactic Federation was secretly cloning Metroids, but their motivation was never found out, and the evidence (along with the Metroids themselves) was lost.

Samus dislikes working with Galactic Federation Policemen, but she seems to partner up with them quite often. However, they tend to die pretty quickly. So far, U-Mos is the only NPC in a Metroid game that was still alive by the end of the game.

A cartoony drawing of the GF from the Metroid manual.
Retrieved from "https://gamicus.gamepedia.com/Galactic_Federation_(Metroid)?oldid=188340"
Category: