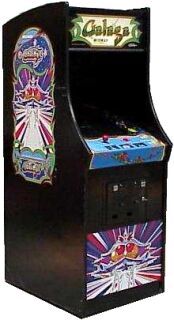 Galaga is an extremely popular and successful arcade game created by Namco. The gameplay borrowed from Space Invaders by pitting a single human controlled ship against a fleet of what could quite possibly be alien space ships who "Increase speed, drop down, and reverse direction." The game is a sequel to the highly successful arcade game Galaxian and is followed by both the less successful Gaplus and the highly innovative Galaga '88.

What made it unique from Space Invaders besides the colorful interface was the use of bonus stages and the way enemy ships would fly in at a round swooping formation, a staple of most Shmup games since. Since it became an arcade classic, Galaga has been ported to the NES, Atari 7800, Game Boy, and Mobile phones.

Galaga is similar in gameplay to Galaxian in that the player controls a ship at the bottom of the screen, shooting at an arrangement of aliens at the top. However, it deviates from Galaxian in the following aspects: