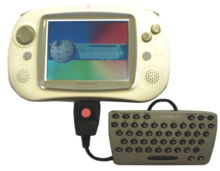 The GP32 (GamePark 32) is a hand held console built by the Korean company Game Park.

The console is based on a 133 MHz ARM CPU, which can be overclocked to 166 MHz through software. This is backed by eight megabytes of RAM (upgradeable using hardware and software mods to 32/64 MB). Unlike similar gaming systems, which are proprietary cartridge-based, the GP32 uses rewritable SmartMedia cards, making it very appealing for amateur game developers. The console also has a USB port for connection with a PC, and a serial expansion port.

There are three main commercial versions of the unit: the original GP32, with no light, the front-lit unit (FLU), modified for Game Park by Hahotech, and the back-lit unit (BLU), released in Europe in mid-summer 2004. At the end of 2004, Game Park also released so-called BLU+ versions, which have a different screen than the normal BLU units. All commercially released units are white with grey or white buttons. There are also a number of differently colored promotional units, and several prototype units with wildly different designs.

The GP32 is natively capable of playing DivX movies. This sets it apart from its rival product, the Game Boy Advance, which requires a third-party upgrade for this feature. The GP32 plays media files more fluently than Nintendo's console.

The GP32 stores its software on SmartMedia cards varying in sizes from 2MB to 128MB. This allows the user to store custom media, applications and games on his GP32, including alternative firmware. Commercial games can be acquired via internet download or in a retail box. The box contains a game CD, which is placed in your PC, so that the software can be transferred to the GP32 system's SmartMedia card via USB cable. This method effectively reduced the price of the games because you weren't paying for cartridges (though you still had to pay for high priced SmartMedia cards to store the games later on). Downloading a game online could range from $10 to $30.

Game Park planned their system to be powerful and useful, but they also wanted users to be able to create homebrew software (a first in video game consoles). When one bought a GP32, one could register the unit on the official website and get a free suite of development tools to create their own games and applications for the GP32. Game Park also allowed (under certain restrictions) the publishing of such homebrew games on their website.

Through this strategy, the GP32 was the host of multiple homebrew applications and games. The various applications made for it ranged from alternative firmware (GUI), games, game generators (such as RPG maker), DivX players, image slideshows, and emulators.

The GP32 has the processing power, and is easy enough to program for that many emulators have been developed for the system. Emulators of many popular 16-bit and earlier consoles are available, as well as of some older computer platforms [1]. Those allowed gamers to play a large variety of older games on their GP32 systems. There is also a Windows-based emulator of GP32, which allows users to run GP32 software on a Windows-based PC. [2]