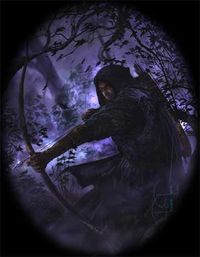 Garrett is the main protagonist in the Thief series of video games. He is a master of stealth, archery, pickpocketing, lockpicking and a host of other thievery skills.

Garrett is cynical and sometimes cold hearted, but he is also extremely gifted and intelligent, and does show compassion and respect for life; he does not take a life unless there is no other way.

For Garrett's extended history, please visit the pages for either Thief: The Dark Project or Thief II: The Metal Age.

Garrett spent the first few years of his life on the hard, cold streets and back-alleys of the city. His talented ability to pick pockets was the only reason Garrett managed to survive. One night, a mysterious robed figure passed by; an attempt to remove the man's gold brought him and Garret into a confrontation, where Garrett found out the man was a Keeper. He was recruited into the order as an Initiate, mentoring under Keeper Artemus, learning the skills and magic Glyphs that bring the Keepers their power. However, as he time went on, he began to resent the secretive and secluded lifestyle of the Keepers, and his time on the street had left him cynical and jaded, and so he left the order to forge out on his own. He returned to his previous style of life, but his time with the Keepers proved invaluable in his new occupation.