Gastly (ゴース, Gōsu, Ghos in original Japanese language versions) is one of 493 fictional species from the Pokémon franchise. Gastly's name comes from the word ghastly, meaning horrible to behold, intentionally corrupted by the word gas, which is prominent in Gastly's anatomy. Its Japanese name is either a misspelling of ghost or possibly a combination of the words ghost, gas, goth and ghastly . In the English translation, Gastly was originally going to be called "Spirit".

Gastly consists of a dark sphere (its "head") surrounded by a light purple gas. A Gastly has two large eyes with tiny pupils and two vampire-like fangs. Its appearance is likely based on the Japanese concept of hitodama.

Gastly is made of a very thin, gas-like substance, which grants it certain powers and weaknesses. Some say it is an other-dimensional lifeform, while others believe it is formed from toxic gas. It can sneak into any place if it so wishes thanks to the invasive properties of gas molecules. It can render itself nearly invisible and approach enemies undetected, and can envelop said enemies regardless of their size and induce sleepiness, slow poisoning through the skin, or even suffocation.

Gastly is known to belch a horrid-smelling, light/dark purple, smog out of the mouth. This gas is so reekish, it may kill other Pokémon.

On the other hand, Gastly's negligible weight gain and gaseous nature make it very easy for it to be blown off or even scattered to nothingness under a strong wind (although it is presumed the molecules can regroup later). A Gastly will not appear in windy weather if it can help it, but when it finds itself threatened by a strong wind, it clusters in groups under the eaves of houses to protect itself.

Gastly is said to frequent decrepit, deserted buildings. It is perhaps worth noting that even though Gastly and the rest of the Ghost-type Pokémon fit some stereotypes attributed to ghosts, it has a measurable weight, can faint in battle, and breed with other Pokémon—all unusual traits for a supposedly dead entity.

Gastly first appears in Pokémon Red and Blue (outside of Japan), and eventually evolves into Haunter. Both ghosts can be found in Pokemon Tower. This is also true for Pokémon FireRed and LeafGreen.

Gastly has had two major appearances in the animé. The first was in episode #20 (The Ghost at Maiden's Peak). According to legend, a young lady was said to have leaped to her death from there after waiting several long years for her true love to return (In the dub, it was said she was turned into stone instead). The legend turns out to be true, however it is not the Maiden that haunts the Peak, but a talking Gastly.

Each year, during a local celebration, Gastly takes the form of the Maiden's spirit and entices males into falling in love with it, whereupon it captures them. It seems that the Gastly's purpose for this is not sinister, but merely an effort to keep the Maiden's legend alive. This supposedly means that its capture is meant to be short-lived.

The Gastly's benevolent nature is further seen when it promises the real Maiden's ghost to look for the spirit of her true love to tell him she is still waiting for him. This Gastly is also extremely notable in that it is the only Pokémon other than Team Rocket's Meowth which can talk naturally, not excluding Slowking from Pokémon The Movie 2000 and Lucario from the eighth film. The few other Pokémon that can communicate in human language, such as Mewtwo and Lugia, are Legendary and speak through telepathy.

This Gastly is also strangely powerful for a Basic Pokémon. It fought by scaring its enemy. For example, it became a fire extinguisher to scare Charmander. When Bulbasaur and Squirtle teamed up against it, it combined their final evolutions into one, calling the product "Venustoise." Gastly creates an actual mongoose to take out Jessie's Ekans, the fourth time an actual animal was ever depicted on the show (The other three times are a worm being eaten by a Pidgeotto in Viridian Forest, the fish in Cerulean City and the lobster served aboard the St. Anne).

The second appearance is in episode #23 (The Tower of Terror). A Gastly, along with a Haunter and Gengar, are seen haunting the Lavender Town Pokémon Tower, which Ash visits when trying to capture a Ghost-type Pokémon. The Gastly puts its vanishing ability to good use playing pranks on Jessie, James and Meowth of Team Rocket.

There is also another role played by a Gastly. In episode #86 (Pikachu Re-Volts), Officer Jenny uses a Gastly to stop Butch and Cassidy's Drowzee, which hypnotized all of the local Pokémon (including Ash's Pikachu). Gastly was immune to Drowzee's Hypnosis and fought off an armada of hypnotized Pokémon using Night Shade, allowing Ash to lure his Pikachu near the machine. Pikachu falls for it and shocks the machine that Drowzee was using to control the Pokémon, causing it to explode.

Gastly also functions as one of Morty's battling Pokémon, fitting in with his Ghost-type specialty. A group of other Gastly whom Morty is good friends with appear to assist Morty in his lessons to the local children about Pokémon battling. This same group, however, also played a trick on Team Rocket, making them think that they were chasing a banquet laden table, only to have it turn into a monster. The trio's resulting panic gave the group much glee.

It briefly appears in the episodes "Drifloon and the North Wind Messenger" and "It's Love! Pokemon Transformation Convention!". The first episode is notable by the fact that a swarm of Gastlys can actually live quite happily in broad daylight. The second episode did not feature a real Gastly but rather an Electrode disguised as one.

Gastly first appears in Volume 1 of Pokémon Special, possessing the corpses of dead Pokémon in Pokémon Tower. Red's Bulbasaur manages to defeat it by sucking up the surrounding air with its bulb, along with Gastly's gaseous form, and expelling it in a SolarBeam.

Gastly also forms as part of the Ghost-type army Agatha sends out to attack the Gym Leaders.

The Mask of Ice also used a Gastly in his team to capture Celebi, due to its type advantage. It was purposed to possess intruders that entered the Ilex Forest. Later, during the fight at the Indigo Stadium, it took out Suicune using its Curse technique, locking Suicune and Misty inside Suicune's crystal wall. It was later defeated by Eusine's Haunter. 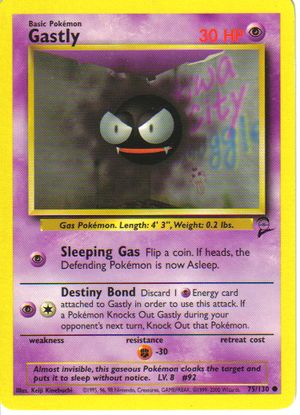 Gastly has appeared in the Pokémon Trading Card Game several times as a psychic basic Pokémon. It was introduced in the basic series.