Gears of War 2 is a tactical third-person shooter video game developed Epic Games and published by Microsoft Game Studios exclusively for the Xbox 360. It is the sequel to the critically acclaimed best-seller Gears of War, and was announced by lead designer Cliff Bleszinski during the 2008 Game Developers Conference on February 20, 2008.

The demo at the Game Developers Conference indicated that much of the core gameplay elements that were central to Gears of War (a third-person game that has a heavy emphasis on using protective cover rather than "run and gun" style game play) would be present in the sequel.

John DiMaggio, the voice actor of the game's main character, Marcus Fenix, confirmed to IGN that players would be able to fight the large Brumaks in Gears of War 2. He also revealed there will be a deeper story with new characters, new weapons, and new enemies. The game will also include the ability for a player to duel with an AI or human opponent when both use the chainsaw attachment of the Lancer rifle, as seen in the 2008 Game Developer's Conference promotional video, later confirmed in informal interviews with developers and a Game Informer preview. Epic released a gameplay video which revealed the player may now use "downed" enemies as shields. Bleszinski confirmed also that players who have been injured can crawl, as a final desperate attempt at life. Players would tap the 'A' Button to crawl faster etc. The level of blood and gore will also be increased, for example, when the player is close to death, wherever he moves there will be trails of blood behind him etc. This is the same for enemies, and the opponents who've been used as a meat shield. There will also be more ways to kill an opponent, such as punching them while they are downed.

The cover story in the May 2008 issue of Game Informer revealed several new gameplay features. Players can now play on individual co-op play settings. One player may, for instance, play on Casual while the teammate plays on Hardcore. A "communal combat system" will adapt to give a player at a lower difficulty an equivalently fair challenge at the player at higher difficulty. The player will be able to maintain multiple save files that work with the drop-in/drop-out co-op features. There will also be a fourth difficulty level that is a level below Casual; senior producer Rod Fergusson admitted that — for the first game — "We overshot on [the Casual] difficulty and a game that was a little harder than we intended." Some of the Xbox Live achievements can be completed through both play in single player and multiplayer mode, such as achieving 1,000 headshots. New enemy creatures are planned on being added, including one described by Cliff Bleszinski as one "that [makes] the Brumak look like a baby panda bear." A Halo-like matchmaking system will also be utilized for the online multiplayer.

The collection of COG tags has been expanded to include the collection of story-based items such as personal letters and medical records, and a "war journal" will track which collectibles have been found and where missing ones can be located. The cut-scenes will also use the better facial rendering technology of the Epic engine, and will use more dramatic angles for the conversation, as well as using a video screen on Jack (the all-purpose robot used by Dom) to talk with their commanders "face-to-face."

New weapons have been announced as well as the return of weapons from the previous game. The accuracy, function, and power of several weapons has been altered, and all grenades can now be used as mines by placing them on walls or floors, and will detonate when approached by enemies. In addition, players can now be knocked over by the concussive force of a nearby detonating grenade. Cliff Bleszinski has also announced that there will be more vehicle missions in the campaign than before, such as the Centaur Tank which Cliff describes as a "tank with monster truck wheels."

Gears of Wars 2 features an upgraded multiplayer mode that will allow up to ten users to simultaneously play. X360 magazine reported that Gears of War 2 will contain at least three online multiplayer modes, called "Guardian," "Wingman," and "Submission." "Guardian" is essentially a modified version of "Assassination" from the original Gears of War, but allows players to continue fighting until the leader has been killed. "Wingman" places players on teams of two, where they both play as the same character. "Submission," formerly known as "Meat Flag," is a version of capture the flag in which players attempt to "down" an enemy controlled by the game's AI and move its body to their team's base to earn points. IGN stated Gears of War 2 would feature "drop in and out" multiplayer in the campaign.

Cameras in the multiplayer modes have also been improved significantly. Rather than static views from different points on a map, the new Battle Cam allows players to pan around a map as the camera focuses on areas of intense fighting, and the Ghost Cam allows a player to roam freely around a map. A photo mode will also be featured, with each photo taken by a player rated on the amount of action in the shot.

Gears of War 2 takes place six months after the detonation of the Lightmass Bomb at the end of the first game. Though most of the Locust Horde was destroyed, the explosion also caused much of the liquid Imulsion underground to vaporize, causing a fatal disease called "Rust Lung" to spread among the diminished human population. While the humans dealt with their casualties, the surviving Locust found a way to build huge sinkholes under the remaining human strongholds. The once impenetrable Jacinto Plateau, one of the last remaining refuges for humans, is showing signs that the same fate awaits it. In order to stop the fall of Jacinto, Marcus Fenix, Dominic Santiago, and a new Delta Squad spearhead the counterattack against the Locust.[9] Senior Producer Rod Fergusson says "In order to save Jacinto, they (the COG) have no choice but to take the war to the locust." Comic writer Josh Ortega says "The stakes are raised. This is humanity's last stand. Everything is at risk. Nothing is safe."

Returning characters will include Marcus Fenix and Dominic Santiago and other characters and adversaries from the first game, as well as Cole and Baird. Lead designer Cliffy Bleszinski has also confirmed that the character Carmine will be returning, but did not reveal how or in what capacity as Carmine was seemingly killed off in the original Gears of War. The game will also introduce several characters; among these are Chairman Prescott, the near dictatorial military leader of COG, Tai Kaliso, "a spiritual and meditative warrior from a tradition of honor bound fighters," and Dizzy, a former Stranded who joined the COG in order to keep his family safe. Dominic's wife Maria will also make an appearance, and Dominic's search for her will play an important part in the story. 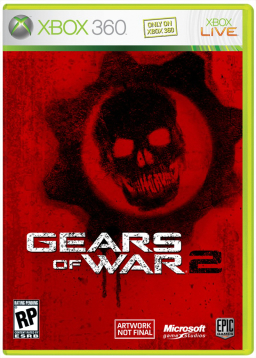 In order to provide a deeper story, the team brought aboard novelist Joshua Ortega as to incorporate more personal drama within the sci-fi setting.

At the 2008 Game Developers Conference in San Francisco, California, as a showcase for the functionality of the Unreal Engine 3, Gears of War creators Epic Games showed various improvements to the engine with specific reference to the sequel itself. The video showed several demonstrations of the improvements, the initial being improvements to the in-game lighting through ambient occlusion, in which dynamic shadows could be generated through the use of a pixel shading technique to render more realistically lighted and shaded objects and actors, illustrated through comparison between character and environment models in the original game engine to that of Unreal Engine 3. Also showcased was the ability of the engine to render hordes of actors within the engine, as demonstrated with a large crowd of locust flocking through the "Gridlock" multiplayer map from the original game. Alongside this technology was improvements to "Matinee," an artistic tool used for the rendering and editing 3-dimensional scenes within the game.

Other physics-based features included improvements to the rendering of water in which specular light and physical interactions with were displayed more realistically, improvements to soft body entities demonstrated with a "meat Cube" and a floating ball possessing properties similar to that of liquid helium. The largest of these physics engine related changes was the introduction of destructible environments due to the implementation of real-time structural analysis tools to generate the damage of the materials and subsequently their deformed shapes based upon resultant forces placed upon them. This was demonstrated with the use of explosive arrows fired from the "torque bow" of the original game causing damage to wooden planks, and also revealing rebar present after destroying areas of a stone structure.