Gengar (ゲンガー, Gengā, Gangar in original Japanese language versions) are one of the 493 fictional species of Pokémon creatures from Pokémon media franchise.

Gengar has an appearance evocative of a ghoul, ghost, shadow, demon or a spirit. It is a bipedal, purple entity with red eyes, big pointy ears, and it always wears an unsettling smile, which, along with stubby hands and legs, makes it look like a gremlin at times. Gengar also possesses a short tail and spikes on its back. Despite its somewhat rough outline, each individual Gengar has a consistent shape. The name is likely derived from the German doppelgänger. In the beta versions of Red/Blue, Gengar was originally going to be called Phantom.

Gengar often has a rather sinister personality, especially when in the wild. It inhabits remote mountainous locations and urban environments alike, being a dangerous Pokémon to encounter in either case. Fortunately, Gengar is a nocturnal Pokémon, so its attacks are limited to the hours of darkness. It has the shape of a spectre. It may be based on the doppelgänger.

Gengar tends to stalk its prospective prey, which includes human beings, and hide in their shadow. It is said that in this way, it has the opportunity to absorb the "vital force"/life of its victims. Gengar acts like a heat sink while doing this, so that its malevolent presence can be given away by a feeling of cold and a shivering sensation.

Another favorite pastime of Gengar is to mimic the shadows of people. A common prank is to take the shape of one's shadow and run past him, giving him the impression that his shadow has come alive and overtaken him. Gengar especially loves to frighten people that way during the nights of a full moon.

Gengar first appeared in Pokémon Red and Blue (outside of Japan), and is the final form in the Gastly evolutionary line. It evolves from Haunter, which evolves from Gastly. In the first three generations, it is only obtainable by trading a Haunter, which causes it to evolve once it arrives into the other player's game cartridge. It only became obtainable in the wild in Pokémon Diamond and Pearl if the player has any one of the five Advanced Generation Pokémon games inserted in Slot 2 of the Nintendo DS and are in the correct area, and have the National Dex.

Gengar was first seen in the anime battling a Nidorino at the beginning of the first episode. This was done to mimic the opening sequence of Red Version. It appeared in episode #23 (The Tower of Terror), which it haunted along with its pre-evolved forms Gastly and Haunter, playing pranks on visitors. This Gengar was not nearly as malicious as its Pokedex entry states, only pulling harmless pranks rather than cruel ones. A more hostile and much larger Gengar (known as The Shadow of the Dark Device) appeared in episode #74 (The Ancient Puzzle of Pokémonpolis) as one of the city's mythical protectors. It battled against a giant Alakazam (another of the protectors) until a gargantuan Jigglypuff intervened and put both to sleep.

Gengar has also been used in battle by Drake, the defending champion of the Orange League, by Morty, the Gym Leader of Ecruteak City, and by Agatha, member of the Elite Four and temporary Gym Leader of Viridian City. Ash has battled against all three and prevailed over the first one. The second one ended in a draw and the last ended in failure, likely due to the Pokémon being in the hands of an Elite Four member.

A talking Gengar is the leader of "Team Meanies" in the half-hour animated special, "Pokémon Mystery Dungeon: Team Go-Getters Out Of The Gate!". He and his partners Ekans and Medicham go around taking missions and being rude to other teams. This Gengar is something of a bully, although he does have a slight soft side.

In Pokémon Special, Agatha has two Gengar on her team. One of them was used to attack Green and Koga from the shadows, draining the latter's life force as it possessed his shadow.

Another Gengar was seen at the beginning of the FireRed and LeafGreen saga in Volume 23. It was used by a kid from Pallet Town in an attempt to capture a Nidorino, thus replicating the opening sequence of the Generation I video games. 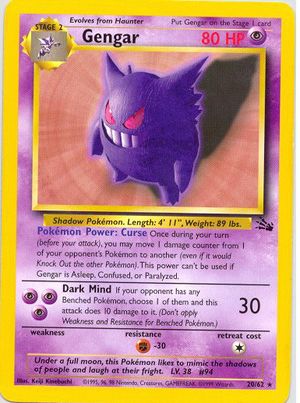 Gengar is a Stage-2 Psychic-type in the Pokémon Trading Card Game, similar to Alakazam and Gardevoir. It has appeared in the following sets:

The Fossil Set featured Gengar as a Pokémon used mostly while on the bench. It's Pokémon Power: Curse allowed the user to move damage around. The ability to take ten damage from one Pokémon to another allowed the active pokémon to attack the defending pokémon, while Gengar (on the bench) moved the damage around evenly, if it was a weak defending pokémon, or to gang up on a particularly strong pokémon.

Gengar EX, as with all EX pokémon, is quite a bit stronger than the originals. It has two attacks: Poltergeist and Prize Count. Poltergeist could do endless damage to the defending pokémon, as the damage is based on the number of Trainer Cards in the opponent's hand, the starting amount is forty (if there are no Trainers) and goes up by ten every Trainer. The attack Prize Count could be the more powerful attack between the two, if circumstances were ideal. The base damage of Prize Count is sixty, but is increased to one hundred if you had more Prize Cards than your opponent. Gengar EX has 150HP, has a weakness to both other Psychics and Dark, a resistance to Fighting and Colorless Pokémon and a two colorless energy retreat cost.