Geodude (イシツブテ, Geodude Ishitsubute in original Japanese language versions) is one of 493 species from the Pokémon franchise. It is speculated that Geodude's is a portmanteau of the prefix geo, meaning earth, and dude, a common nickname for a male. Geodude also seems to incorporate the word 'geode.' The Japanese name, "Ishitsubute", is a portmanteau of 石 ishi (stone) and 礫 tsubute (throwing stone). In Gold and Silver until Emerald, it could be found by using the move Rock Smash to destroy cracked rocks. The only other Pokémon that can be found this way are Krabby, Shuckle, Nosepass and Geodude's evolved form, Graveler.

Geodude has a rock for a head and no legs. Its long member starts with a bulging muscle and end with rock hands resembling a human's. It also seems capable of hovering off the ground (though not completely flying) in the anime series. It is very strong, as witnessed in various episodes of the anime.

Geodude most frequently are found in fields and on mountains. It is precisely this that makes people step or trip on them from time to time, thinking they were rocks. Its arms are so strong that it can use them to climb mountains. Rhyperior sometimes accidentally shoot Geodude from their cannon-like arms.

In Pokemon Red and Pokemon Blue Geodude is very common in the Rock Cave after Cerulean City. In Pokemon Silver and Pokemon Gold it is found in a variety of caves in large numbers. In Pokémon Leaf Green, Geodude can be caught in several areas of Kanto, as well as One Island and Seven Island of the Sevii Islands. In Pokémon Ruby, Geodudes can be found at Routes 111, 114, Granite Cave, the Safari Zone, and Victory Road. In previous games, it is a very common Pokémon. When inside caves, the player is most likely to find a Geodude. It is also catchable in Pokémon Diamond and Pearl where it is extremely common in the caves surrounding Jubilife City, Oreburgh Mine, Mt. Coronet, Routes 207, 208, 210 (north), 211, 215, 216, Steel Island and Stark Mountain. Geodude evolves into Graveler at level 25.

Geodude's stats are all generally dismal with poor speed, and limited base stats in all except for a few: its attack (base 80) and its incredible base defense of 100, superb for a basic Pokemon. In addition to this, Geodude's evolved form, Graveler, learns the good moves Magnitude (10 different random powers) and Rollout, a strengthened Rock version of Fury Cutter. These make Geodude an excellent Pokemon for its type, with solid attack and defensive stats. The primary problem with Geodude is that they have two types to which they are extremely weak (quadruple damage), grass and water.

In the Super Smash Bros. Melee battlefield "Poké Floats", a Geodude is the last float the fighters ride on before returning to the Squirtle float.

Geodude are also found in the Nintendo 64 game Pokémon Snap in the Valley Course. They will be hanging from the sides of mountainous cliffs and can only be properly photographed if first knocked off their perches by Pester Balls and fall to the ground. Knocking down Geodude is also the only way to photograph Sandshrew and Sandslash.

Geodude is a frequently occurring character in the Pokémon anime. It is a Pokémon owned by Brock, former Gym Leader of Kanto's Pewter City. Geodude is portrayed as very friendly, and is one of the first Pokémon to become friends with Ash's Larvitar. Brock does not take Geodude into Hoenn. During his visit to the gym, shown in Pokémon Chronicles, Brock gives it to his brother to fight with as Gym Leader. One feature about Geodude is that it can levitate above the ground, even though it is a rock. Geodude has not evolved yet despite the tenure of being on Brock's team since the beginning of the Pokemon series. Geodude can also be found in the new versions of pokemon (Diamond and Pearl) in various areas.

Geodude is one of the Pokémon owned by Danny, the Navel Island Gym Leader. It was seen participating in the Sled Race along with Danny's Scyther and Electrode.

Geodude also has a role in Hooked on Onix.

Geodude makes cameos in the Red, Green & Blue chapter in Onix is On! standing next to Brock, suggesting that he is its owner and in Raging Rhydon as a Mt. Moon wild Pokémon.

Brock is seen with no less than eight Geodude on the jacket of Volume 8. The Geodude octet is later seen in Volume 14, attempting to halt the Magnet Train with a combined Magnitude. 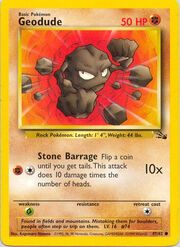