Girafarig (キリンリキ, Kirinriki in original Japanese language versions) is one of the 493 fictional species of Pokémon from the Pokémon Franchise – a series of video games, anime, manga, books, trading cards and other media created by Satoshi Tajiri.

Girafarig's name is a palindrome: a reference to its having two heads, one at each end. The Giraf at the beginning of its name refers to its resemblance to a giraffe, and the end of its name is the same sequence spelled backwards. The same idea, though based on the sequence of syllables, lies behind its Japanese name, Kirinriki – kirin being the Japanese word for "giraffe". In modern Japanese, 麒麟 kirin simply means giraffe, but it is also the Japanese name of Qílín, the Chinese unicorn. The Qilin was feared by criminals as it was able to detect guilt. After sensing the guilt, the Qilin would stare at the guilty party and pierce its heart.

Girafarig is shaped somewhat like a very short-necked giraffe (similar to an okapi), with a similar head shape, and a much smaller black spherical head on the end of its tail. Its front half is yellow with dark brown spots, and its back half is the reverse of this, dark brown with yellow spots. It has a pink snout and pink spikes running down its neck.

Girafarig's most notable feature is the fact that it has an extra head at the end of its tail which bears a resemblance to the Chain Chomps, an enemy species featured in the games starring Nintendo's flagship character Mario. The small head is equipped with a rudimentary brain, which can fulfill basic functions like keeping the head alert while Girafarig's main brain is resting in sleep but is not developed enough for actually thinking.

Since it can't cogitate, the smaller head's reactions are instead based on instinct. Girafarig's tail-head reacts especially well to aural and olfactory stimuli. An alluring smell, for example, will cause it to bite at the perceived food; therefore, anyone approaching Girafarig from behind should be careful not to get too close, biting may result. Similarly, when Girafarig eats, the smaller head mimics the chewing and swallowing motions exercised by the main head.

In Pokémon Gold and Silver, Girafarig is found in Route 43. In Pokémon Ruby, Sapphire and Emerald, it is encountered in the Safari Zone. It is one of only two Normal-type Pokémon to have an additional type that isn't Flying. (The other is Bibarel, a Normal/Water Type that was introduced in Pokemon Diamond and Pearl.) This helps balance out its statistics, as the Normal-type prevents it from being injured by Ghost-type attacks, and it learns Psychic moves which are super-effective against Fighting Pokémon. Girafarig is known as the most versatile user of Baton Pass, a move which transfers its statistics to another Pokémon.

On the Gamecube game, Pokemon Channel, you can see Girafarig at the beach.

Girafarig was featured in episode #158 ("The Psychic Sidekicks"). It belonged to a girl named Cherrie who was trying to connect with it on a psychic level. It made an additional appearance in the third movie, Spell of the Unown, where it battled Ash's Pokémon during the opening credits. Also, in episode #406 ("A Judgement Brawl") a trainer named Morrison uses a Girafarig to fight against Ash's team in the second round of the Ever Grande tournament. 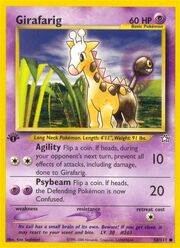 Girafarig has been seen only occasionally in the Pokémon trading card game, in all cases as a Basic Pokémon: