The name Gligar is probably derived from the words glider and gargoyle.

Gligar looks like a cross between a scorpion and a bat. Its whole body is purple. It has a stinger in place of a tail, its hindfeet have claws and its forelegs have large pincers. Between forelegs and hindfeet extends a leathery membrane that functions as wings. Each of these wings have a spike protruding from its side. Gligar makes its home on steep cliffs. When it spots prey, it lets go of the cliff's face, spreads its wings and glides towards its target. It does so completely noiselessly and effortlessly, as if it were sliding, so it always catches its victim by surprise when it flies straight to its face. It then uses its claws and pincers to secure its hold on the opponent's face and injects it with poison from its tail barb (this particular type of behaviour is associated with the Face Hugger aliens). The prey is paralyzed and Gligar finishes off its prey with a vicegrip. After it has finished hunting, Gligar returns to its nest on foot. A female Gligar has a smaller stinger.

Gligar's stats are more or less acceptable, and its Defense and Speed are very good. Its unique type combination of Ground/Flying grants it immunity against Electric-type attacks while granting it with other resistances.

Gligar and its evolution, Gliscor, are the only Pokémon who are immune to both Electric and Ground attacks besides Vibrava and Flygon (due to their type and Levitate ability). Grass and Rock-type attacks will do only neutral damage, but Gligar is still susceptible to Water attacks, and Ice attacks will have quadruple strength against Gligar.

As of Generation IV, Gligar evolves into a Pokémon named Gliscor.

Gligar had a few anime appearances. A Gligar was owned by a toyseller who secretly worked as a vigilante named Gligar-Man, a spoof of Batman. Another one was owned by Morrison, Ash's rival. It has also made several small background appearances, such as being a boy's partner in the Pokémon orienteering time contest. Ash catches one in the Episode "Riding the Winds of Change" after Paul catches its evolved form, Gliscor.

A Gilgar appeared in the Pokémon Special manga Volume 9 that tried to eat Gold's Togepi egg. 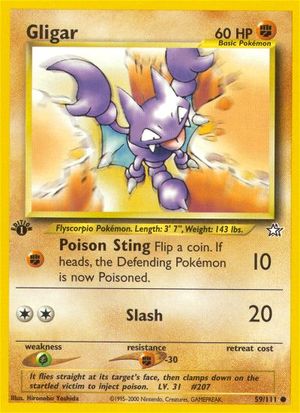 Gligar has made a few appearances in the Pokémon Trading Card Game: