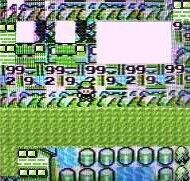 Glitch City is a term used by Pokémon gamers to refer to a hidden fictional city caused by a bug that occurs in the Pokémon video game Red, Blue and Yellow versions.

The term Glitch City is not to be confused with Blue Hell - a more general term that refers to a non-existent area in any interactive game.

Partially complete map of the Glitch City accessed through the Cinnabar coast in the Red and Blue versions (tinted red), showing the area that the player can walk in

There is more than one Glitch City, and one can find them by going somewhere other than Cinnabar (like Cycling Road or Victory Road).This means that a player can create different glitch cities depending on where they are when the timer sounds. The Seafoam Islands and a few routes allows the player to move around; however, in most other Glitch Cities, the player will be surrounded by objects with a solid property (such as a post outside of glitch city), and unable to walk around.

File:GlitchCityYellowversion.jpg
Glitch City accessed through the Cinnabar Island coast in the Yellow version.

The most common Pokémon found in the Glitch City accessed through the Cinnabar coast are Tentacool. A player can also fish for Pokémon in Glitch City.

Going too far to the left or right will often get the player stuck in an invisible wall. If one presses Start, often the graphics and pixels of the city will change briefly.

In Pokémon Yellow you may also see Pikachu running in random places.

The area in which the surfing part of the glitch takes place has some sort of 'unspecified' designator given by the designers which makes numerous glitches happen (including Missingno. and 'M. However, if the player is not on the Cinnabar coast and in the water just off shore when the Safari Zone "Ding-Dong" occurs, the player will be sent to the same Glitch City that that player would've been sent to if he/she had been on the coast. Also, the Glitch City "Ding-Dong" can take place anywhere (see "Location" section above) even though in some places such as Viridian City, an actual glitched city will not occur.)

The music in the Glitch City accessed through the Cinnabar Coast is the same music theme as the one played on routes.

In Glitch City, pixels and graphics from different parts of the game are mixed up (see picture). The land and water can also be mixed up so sometimes it appears that the player is standing on water or surfing on land. This is usually caused by using a fishing rod or pausing the game (which causes parts of Glitch City to change). If the whole city turns to water (which is sometimes possible), the player can keep surfing forever until the player gets stuck or the game automatically shuts off. (However, a player should not surf for long distances while in Glitch City, because it can corrupt a player's game.) In the Yellow version, if one goes to the right, they will find a row with 3 9's. If they walk into this, Pikachu will disappear. When he/she walks out of it, Pikachu will follow their "recorded" path back to them.

In the Glitch City accessed through the Cinnabar Coast, in some cases players are able to surf in northern direction until they reach the barrier that normally prevents them to leave Sea Route 20 northward. When reached, however, the graphics become even more glitchy and the entire game freezes. If this is done while playing Pokémon Stadium, it will say the game has been corrupted, but the game is actually not corrupted (Pokémon Stadium just interprets it as being corrupted).

Because invisible walls that trap the player exist on the western side of the city, going north is usually the only way to escape the "normal" Glitch City. If a player goes to the westernmost "checker-board" water pattern in the city, and goes left of it one square and then right one square, this will enable the entire city to become water (when the player presses "start") and allow the player to swim north until they reach the barrier that normally cannot be crossed (causing the game to freeze). Once the player is far enough north, before reaching the northern border the player can swim east or west for a long period of time until the game freezes.

Another notable Glitch City location is if the Safari Zone "Ding-Dongs" whenever you are moving due to a Spin Tile (such as in Viridian City Gym). Your character (and Pikachu on Yellow Version) will spin whenever you move. You will be unable to access the menu, talk to people, enter buildings, or enter battles while spinning.

The Glitch Cities found in the Yellow version are different to those that are found in the Red and Blue versions.

In the Red/Blue versions, the largest glitch city is activated through the route just north of Vermillion city.

Note: The following links are also used as references (sources) ONLY for the Access, Location and Highlights sections of the article: