The name Golbat may derive from the words goal and bat. It can also be accepted as a reference to the villain Golden Bat of the tokusatsu Jinzo Ningen Kikaider series, or the actual species Golden Bat (Mimon bennettii).

Golbat is a fierce nocturnal Pokémon, residing in the darkness of caves, and is most active in the pitch black of night, especially if the moon is in its new phase. It is widely known and despised for its feeding behavior: Sucking fresh blood from living things in large quantities. Once it has found a living target, it attacks in a stealthy manner, often striking without warning from behind, to harshly bite down on its prey with its four sharp fangs strong enough to puncture the hide of any animal-like Pokémon, however strong the hide might be. It then proceeds to drink ten ounces of blood instantly. Golbat enjoys blood so much that it does not want to stop, even though a lot of blood will weigh it down enough so that, if it is able to even fly afterwords, it flies clumsily.

Surprisingly, after each attack and feeding sequence, Golbat’s own blood type changes into that of its victim. Once it strikes, it will not stop draining energy from the victim even if it gets too heavy to fly.[1] The female's fangs are smaller than the male's.[2]

Golbat is the evolution of Zubat, #41. Golbat's elemental types are Poison and Flying. Despite being a Stage 2 Pokémon, Golbat can be found in the wild in many cave locations in every version of Pokémon. Agatha of the Elite Four uses one.

Golbat was considered the final evolution of Zubat in the R/B/Y series of Pokémon games. When the G/S/C series was introduced, it was revealed that if a player were to make his or her Golbat happy enough, it would evolve into a Crobat.

In the R/S/E series Golbat is an uncommon Pokémon. In Emerald, Sapphire and Ruby, it can be found in the water of Meteor Falls. In competitive battling Golbat is still used for the lower tier battles.

Unlike the typical evolution process (evolving at a certain level), Golbat evolves into Crobat when its happiness rating is high. A Pokémon's happiness rating can be measured in different ways throughout the games. In the GSC series, there is a woman in Goldenrod City who will rate the happiness of the player's Pokémon, and in the RSE series, there is a woman in Verdanturf Town who will also rate the happiness of your Pokémon. However, having its happiness rated does not have any effect on a Golbat's evolution; it only gives a rough measure of when it will evolve. When a Golbat is sufficiently happy, it will evolve into Crobat the next time it levels up.

Golbat has made most of its appearances under Brock's control, debuting through evolution in the episode "Hassle in the Castle". Koga also owned one. Agatha of the Elite Four also has one as seen in the episode 'The Scheme Team'. A Pokémon Hunter's henchman owned one in 'Mutiny in the Bounty'. The rest are cameos by Golbats owned by other trainers.

Koga has a Golbat as one of his team members. This Golbat is special in that it is able to use Supersonic in order to project a clear visual of the locations of others, using its gaping mouth as a screen. Agatha also possesses a Golbat. 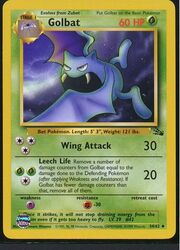 Golbat has had many cards under its name throughout the lengthy history of the card game, all as stage-1 Grass-types: