Goldeen (トサキント, Goldeen Tosakinto in original Japanese language versions) is one of the 493 fictional species of Pokémon creatures from the multi-billion-dollar Pokémon media franchise—a collection of video games, anime, manga, books, trading cards, and other media created by Satoshi Tajiri.

"Gold-" refers to the fact that it resembles a goldfish. The "-een" is most likely "queen," but it is possible that it is a simple feminine suffix (misspelling of "-ine"). The Japanese name plays on tosakin (土佐金, tosakin), for goldfish's kind. In the original Beta version, it was known as Goldy.

Goldeen are 2-foot-long Goldfish with notably elegant arrays of dorsal, pectoral, and tail fins and horns on their heads. In the water, these fins billow elegantly enough that the Goldeen species has been given various nicknames such as the Water Queen and the Water Dancer. The fin itself resembles that of the tosakin goldfish breed. Males have longer horns than females.

Goldeen, fish Pokémon which love to swim wild and free, are a common sight in rivers and ponds, especially in the springtime when schools of these Pokémon are seen swimming up rivers and forcefully up falls. The springtime is the mating and spawning season for Goldeen, so they congregate and swim especially gracefully in search of the perfect mate. Afterwards, when it is time to lay their eggs, Goldeen mates swim up falls in large groups to their destinations.

Goldeen are deceptively powerful fish. Their dorsal and pectoral fins are strongly developed like muscles, allowing them to swim their way nonstop up rivers and falls at a constant speed of 5 knots. They are inclined to ram intruders such as humans powerfully with their horns, and if held in captivity in an aquarium, they will shatter even the thickest glass walls of the aquarium with one sound ram of their bodies and horns to make their escape.

Goldeen first appeared in Pokémon Red and Blue (outside of Japan), and can only be caught by fishing or surfing on the water. It eventually evolves into Seaking.

Misty's Goldeen first appeared in Pokémon Emergency and has appeared in many episodes as well as the short Pikachu’s Vacation. Its first appearance was in the second episode, though it was helpless because it was sent out on dry land. 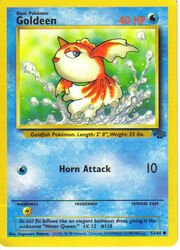 Goldeen cards in the Pokémon Trading Card Game have been printed in the Jungle, Gym Heroes (twice as Misty’s Goldeen), Neo Revelation, Expedition, Skyridge, EX Ruby and Sapphire, and EX Deoxys. All of these cards are as Basic Water-type Pokémon.