In all games, Golduck appear as large bipedal duck, with blue skin and powerful tails. They also have strong legs and arms to swim with, and each has a red jewel on its forehead which is connected to its telekinetic powers.

Its name is derived from the word duck, the animal which it is based on. The meaning of "gol" is less clear. IGN Game Guides says the name Golduck is based on the original Japanese name Gorudakku, but guesses "gol" means "gold". GameFAQs suggests that "gold" means "great" in this context.

"Gold" is ironic because its pre-evolved form, Psyduck is gold-colored, whereas Golduck is blue. The name Golduck can refer to the species as a whole, as well to individual Golduck in the games, anime and manga.

In the Pokémon Red Blue and Yellow games, Golduck are said to live in fresh-water lakes and in rivers,[1] though in the Sapphire game it is clarified that they can also be seen occasionally in coastal waters.[2] Golduck are portrayed as fast swimmers,[2] outswimming even the most athletic of humans because of their frog-like webbed hands and feet.[1] The gem on their foreheads glows when they use psychic powers as well as when they swim at full speed,[2] suggesting that they sometimes use those powers to swim.[2]

Golduck have webbed hands and feet, ending in broad flippers,[1] which they use to swim in rivers and lakes,[2] much in the way as a duck would move. Their blue bodies are especially adapted to have a great hydrodynamic shape, and they have long tails with which they use to steer. Due to their bluish color and webbed hands and feet, Golduck are sometimes mistaken for the Japanese monster and physical inspiration for Golduck, the |Kappa.[1]

It has been noted that Golduck will often join swimmers when training,[2] using their adept Psychic abilities to increase their swimming capability.[2] They are sometimes found rescuing people lost at sea from danger, their heads shimmering from the telekinetic powers that allow them do so.[2] The headaches that troubled its Basic evolution form, Psyduck, don’t trouble Golduck,[2] allowing them to have full use of their formidable mental powers.[2]

Golduck is the evolved form of Psyduck, a common Water Pokémon. Evolution is a metamorphic change that turns one creature into another. Psyduck can evolve at Level 33 or higher.[3] Golduck can also be caught in the wild in some areas of the Pokémon universe, being found in Kanto, Johto and Hoenn,[3] and a corrupted Golduck can be “Snagged” from a non-playable character in Pokémon XD: Gale of Darkness.[4] Golduck’s main strengths lie in their Speed and Special Attack stats, allowing them to use powerful ater attacks quickly.[5] However, Golduck, on average, have a higher Defense than these Pokémon, making them less susceptible to being knocked out. Like Psyduck, Golduck are not Psychic-type, despite Psychic attacks being their trademark moves.[3]

Golduck are used by gym leaders, strong opponents in the game that block progress through the game, |Misty, a Water-type expert, in Pokémon Gold, Silver, and Crystal, and again by Whitney, a Normal-typ] expert in Pokémon Stadium 2.

There are seventeen different Pokémon types (a special attribute determining strengths and weaknesses of each species), offsetting each other in a complicated series of rock-paper-scissors relationships. The Golduck is a water-type (although it has the ability to learn Psychic-type attacks naturally) so their attacks are particularly effective against Ground, Rock and Fire-type Pokémon, but Electric- and Grass-type attacks are particularly effective against it. Attacks of the Fire-,Ice-, Steel- and Water types do little damage to Golduck, and Golduck do little damage to other Water- and Grass-, or Dragon-types. All other types have no particular advantage or disadvantage when facing Golduck.

A Golduck first appeared in “Bye, Bye Psyduck”, in which Misty, a female companion of Ash Ketchum, believes that her own Psyduck, the pre-evolution of Golduck, has evolved into a much more powerful Golduck.[6] Misty meets a trainer named Marina, who like herself, apsires to be a Water Pokémon master, and agrees to battle her. During the battle, Misty discovers that Marina, too, has a Psyduck, although Marina’s is much more obedient, compared to the scatterbrained wimpish Psyduck of Misty’s.[6] During the battle, Psyduck disappears and is replaced by a Golduck, prompting Misty to believe that her Psyduck has evolved.[6] However, after Team Rocket, attempting to capture Misty’s and Marina’s Pokémon, are defeated, Misty discovers that it is instead a wild Golduck, battling to impress female trainers.[6] At the end of the episode, Misty makes the humorous comparison between the Golduck and another companion of Ash’s, rock, a Pokémon breeder who continuously falls for various females in the anime, commenting that “It’s just a Pokémon version of Brock.”[6]

Various other Golduck have made minor appearance in both the anime episodes and movies, in the film Pokémon: Mewtwo Strikes Back, a Golduck is brought by its trainer to New Island to face the challenge of Mewtwo,[7] later being captured by the Psychic Pokémon, then cloned along with all of the other Pokémon brought to challenge Mewtwo.[7] The cloned version of Golduck later appeared in the sequel, Pokémon: Mewtwo Returns.[8]

Another Golduck participated in a fire-fighting tournament involving Water Pokémon in “The Fire-ring Squad”.[9] A Golduck owned by a minor character, called Trixie, fell in love with an Azumarill that was also being wooed by Ash’s Totodile in “Love, The Totodile Style”.[10] Other minor Golduck have appeared in “The Perfect Match!”,[11] “Hi Ho Silver ...Away”,[12] “Abandon Ship”,[13] and “A Double Dilemma”.[14]

In the Sinnoh-region episode based on the games Diamond and Pearl, Golduck makes an appearance in the 7th episode of the tenth series of the anime show entitled "Like it or Lup It". In it, a wild Golduck leads a team of a wild Poliwag, Wooper and Quagsire and together with Dawn's Piplup revolts against a group of wild Ludicolo whom they suspect to have stolen their fruit, not realizing that in fact it was Team Rocket that stole it. In the end of the episode, all things get cleared up though.

In the Pokémon Adventures manga, Blue has a Golduck, which serves as one of his main modes of transportation. When Blue’s Pokémon were temporarily switched with Red’s, Golduck and its teammates did not warm to their new trainer quickly. However, by the time all parties were properly reassembled, Red’s caring nature and closeness with Pokémon had rubbed off and Blue could sense a shift in their personalities.

Blue’s Golduck has often used its highly-developed psychic abilities to give its trainer a tactical advantage, and Blue is able to channel its thoughts or his own through his Pokédex. During the siege of Saffron City, Golduck scanned the city with Confusion and showed Blue the location from which a Mr. Mime was projecting the enormous barrier that prevented Red, Blue, and Green from entering the city. This allowed Red’s Pikachu, Pika, to knock out the offending mime so that the trainers could proceed, and repulse the invading Team Rocket. Inside the Rocket command center at Silph Co. HQ, however, Golduck’s abilities were disrupted by interference from Sabrina and her Pokémon.

Not too long after, Blue encountered and was captured by Agatha during an adventure which he later related to Yellow. While Surfing on Golduck near the eastern shore of Kanto, Blue was persuaded to investigate a disturbance at the abandoned Kanto Power Plant. Agatha and her Ghost-type Pokémon captured Blue and assaulted him with Dream Eater, but Golduck read Blue’s mind and transmitted his thoughts to the Pokédex, allowing Blue to instruct the young boy accompanying him. The boy created a diversion, which let Blue free himself and drive Agatha away. 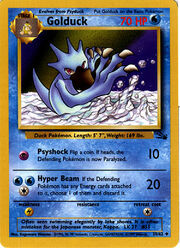 The Pokémon Trading Card Game is a collectible card game similar in goal to a Pokémon battle in the video game series; players must use cards (with individual strengths and weaknesses) in an attempt to defeat their opponent by "knocking out" all of his cards.[15] The game was first published in North America by Wizards of the Coast in 1999, until Nintendo USA started publishing the series in 2003.[16]