Golem (ゴローニャ, Gorōnya, Golonya in original Japanese language versions) is one of 493 fictional species from the Pokémon franchise. Golem's name originates simply from a golem. In Jewish mythology, the golem is a magically animated man made of mud or clay.

A Rock- and Ground-type Pokémon, it is one of the most powerful Pokémon of its type, and one of the heaviest overall. Golem is the evolution of Graveler, and one of the few who will only evolve when traded.

Golem inhabits rocky mountains and volcanoes, often disguising itself as an inanimate boulder. When earthquakes occur near where Golem live, they will tumble down mountains, rolling at an incredible speed. The rolling Golem are very dangerous, so villagers living on or near mountains dig grooves in the side of mountains to direct the rolling Golem.

Its boulder-like body is almost impenetrable, able to withstand dynamite blasts without any damage whatsoever. It can even detonate its own body, launching itself great distances in order to travel from mountain to mountain.

It will annually shed its skin like a reptile. Once it sheds its skin, its body turns tender and whitish. Its hide hardens when exposed to air. The discarded shell quickly crumbles into the earth, and its new shell is often bigger than the one before.

The name "Golem" is actually not entirely accurate, as this creature is made from living stone and not assembled mud given life (though it can learn the mud-based moves Mud Slap and Mud Sport.)

Golem first appears in Pokémon Red and Blue, and it is the final form of the Geodude evolutionary line. It evolves from Graveler after it is traded to another player, which evolves from Geodude.

It appears in other Pokémon games, including Pokémon Snap, Pokémon Ranger and Pokémon Mystery Dungeon: Blue Rescue Team and Red Rescue Team, where it can be a potential member of the player's party.

Golem first appeared in the Pokémon anime in episode 36, "The Bridge Bike Gang". Chopper, a member of that bicycle gang (to which Jessie and James of Team Rocket briefly belonged) uses one to battle Ash. However, when Ash's Charmander turns Golem in a rolling ball of flame, the bike gang is sent scattering until the trainer recalls it--- and even then, he has to toss the Poké Ball from one hand to the other because it is so hot.

Golem appeared in episode 40 (Showdown at Dark City) as one of the Kaz Gym's Pokémon.

Another Golem was used by a trainer in the Pokémon League against Ash's rival Gary's Nidoking and Gary lost.

Later, one was used by Giovanni to battle Gary in "Battle For the Badge".

A wild Golem attacked a pack of Houndour in "Hour of the Houndour", but was driven off by Ash's Chikorita.

In "The Wayward Wobbuffet," a Golem belongs to the master thief Gonith.

Ash's rival Gary Oak used his own Golem in "Can't Beat the Heat!" against Ash's Charizard in the first round of the Johto League finals, but was defeated, despite being too heavy for Charizard utilize its signature Seismic Toss attack.

A Golem entered a Sumo Contest in Johto but was deafeated by a Feraligatr.

Later, Flint of the Pewter City gym used a Golem against his wife in the Pokémon Chronicles episode "A Family That Battles Together, Stays Together!"

A number of them appeared in the Battle Frontier episode "Hooked on Onix," as well as one of them appearing as a Pewter Gym Pokémon in the episode "Grating Spaces".

It also appearred in “Cavern of Golem”.

In Volume 3 of Pokémon Special, Giovanni is seen with a Golem as the second Pokémon he sends out against Red. Its best attacks involve its body shattering, allowing it to use Rock Throw.

In Volume 7, Yellow's Graveler evolves into Golem during the final battle on Cerise Island. 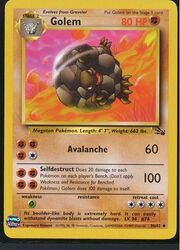 Although being one of the original 150 Pokémon, Golem seldom appeared between Fossil and the '"E-card" sets. Golem has appeared in the following sets: