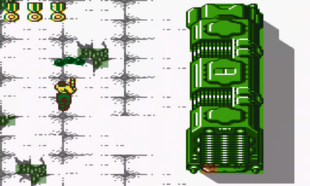 Goochie is a large armored truck encountered halfway through Area 2. It is first seen parked on the side of the road; as the player moves forward, the truck will catch up from behind and open three hatches on its top, revealing two double-turrets that fire in a spreading manner and one device that launches bombs. The truck will also open its rear door, from where infantry units will be coming out during the encounter.

Once both turrets and the bomb launcher are destroyed, the whole truck will explode.