Though Goofy Goof (almost always called just 'Goofy') has (probably) been in lots of Disney games, his most important role (and most likely the only one anyone cares about) is in Kingdom Hearts. Goofy is the captain of the royal knights of Disney Castle, and the King's most loyal subject. The King, in his unexpected absence, left behind a note for Goofy and Donald, telling them to find the one who bears 'the Key'. So, they found Sora. They end up following Sora for most of the rest of the game. 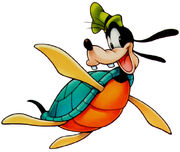 If this doesn't make you giggle you're dead inside.

Goofy supposedly despises weapons, so he uses a shield... as a weapon. Makes sense. He plays the role of the 'guardian' in the party, whereas Donald is the magic user and Sora is kind of like a Red mage. Goofy has a LOT of pockets, and can hold lots of potions and ether to cure party members. Later in the game, he learns MP Gift, which allows him to give 3 MP to any other party member at the cost of 1 MP, this makes him indispensable and awesome. Goofy's attacks are all unique to him, as they all involve hitting things with his shield. In Atlantica Goofy turns into a turtle, and his shield rests on his shell. He also looks hilarious.

Neither Goofy nor Donald have really big or important roles in the story, other than the fact that they are Sora's friends. This fact becomes increasingly more important as the game progresses.

In the first Kingdom Hearts game Goofy and Donald were given orders by the King to find the key bearer, which lead them to Sora. Goofy, Donald and Sora traveled to different worlds in search of the King, and Sora's friends, Riku and Kairi. This ultimately lead to them saving the world or something.

"Captain of the royal knights. He avoids fighting whenever possible. Mickey's most loyal subject. Because Mickey said to follow the key bearer, he once left Sora to follow Riku. But friendship soon led him back to Sora."

Remember Goofy? He's back! In card form! In this game, the 'Goofy card' can be obtained in battle from an enemy. It can be used to call Goofy onto the field, who attacks things with his shield. Later in the game, Sora can learn the Trinity Limit combo, which uses the Goofy and Donald cards, in addition to any Keyblade card, to severely damage and usually kill everything on screen.