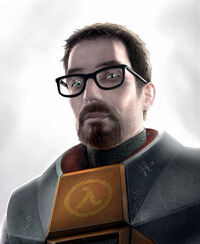 Gordon Freeman in a HEV suit

Dr. Gordon Freeman is the main protagonist in Half-Life series, known for his crowbar, bright orange HEV suit, and more recently his Gravity Gun (AKA: The Zero-Point Field Manipulator). Gordon is a 27 year old male scientist who holds a doctorate in Theoretical Physics from MIT. With help from his mentor, Dr. Isaac Kleiner, he attained a job at the top-secret Black Mesa Research Facility as a Research Assossiate in the Anomalous Materials Laboratory.

In Half-Life, an accident unleashes an alien invasion on the Facility, and the government sends in a military clean-up squad to kill everyone at the base. Gordon is forced to fight for his very survival, and aid the science team in stopping the invasion. He succeeds in destroying the being responsible for the invasion, and in doing so earns the interest of a mysterious man in a blue suit, known as the G-man by some. The G-man offers Gordon a job working for him; Gordon accepts and is told he will see the G-man "Up ahead."

Half-Life 2 begins with the G-man awakening Gordon 10 or so years after the Black Mesa incidient to find the world a very changed place. An alien empire known as the Combine has taken over Earth, and is steadily turning the population into slaves. Gordon is placed within City 17, a war torn Eastern European city taken over by the Combine, and home to the Citadel, the center of the Combine's control and home to Dr. Wallace Breen, the former Administrator of Black Mesa, now the "human" face of the Combine. With the help of Dr. Kleiner, Dr. Eli Vance, Dr. Judith Mossman, Alyx Vance and Barney Calhoun, Gordon manages to lead the people of City 17 into a rebellion, and infiltrate the Citadel, eventually destroying the Dark Fusion reactor at the center of it. Just as the explosion from the reactor is set to engulf Gordon and Alyx, the G-man slows down time and once again congratulates Freeman, saying that he has done such a good job that there are several interesting offers for his services. Instead of giving Gordon a choice in the matter, he simply sends him back into stasis stating "I trust it will all make sense to you in the course of... Well, I'm really not at liberty to say."

Half-Life 2: Episode 1, begins right after the event of Half-Life 2. Gordon and Alyx had to go back into the citadel to repair it allowing them enough time to escapeCity 17.