Gracia first appeared in Samurai Warriors 2: Xtreme Legends. She is Mitsuhide Akechi's daughter and Tadaoki Hosokawa's wife. She's symbolized by the kanji for "shine"(煌) and "brilliance"(輝). 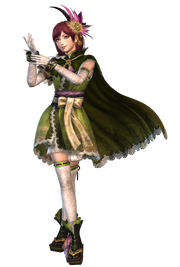 Gracia is introduced as a young girl who ran away from the confines of her home to learn more about the world. She's attacked by a group of rowdy soldier soon after she escapes. She's saved and tended to by Magoichi. Amazed by his heroics, she dubs him her mentor and follows him everywhere he goes. Once she learns that friends are people who look out for one another, she befriends Magoichi and they make an oath to save each other when they're in trouble.

In Warriors Orochi 2, Gracia and her father are taken hostage by Sun Wukong's troops. He hoped to lead them to Kiyomori Taira but they are saved by Xing Cai and Ina. In gratitude, they help stop the sorcerers concealing Sun Wukong's location and join the Shu forces. In one of the game's dream modes, she teams up with Cao Pi and Guan Ping to prove themselves worthy heirs to their fathers. Her goal is relatively simple as Mitsuhide wants to see if she can save peasants from being killed by bandits. If she succeeds, her father will be pleased.

Gracia was one of the female characters that the director wanted to include in the series. She was designed to be a woman of high class whose charm point is her unique hairstyle.

Gracia is an optimistic and curious girl.

Her weapon of choice are two bracelets that grant her magical powers. Her normal attacks are punches and spinning knee attacks with a short and hard-to-aim range. She has the strongest Musou stat in her Samurai Warriors appearance but is the weakest physical fighter in the game. Though it is possible to play Gracia with her normal moveset, most players recommend relying on her R1 specials to do bulk of her fighting. As such, she is a character who guzzles her Musou bar. However, she has various tricks that she can use to quickly refuel herself, such as her C1 or C2. Alternatively, players can also let her ride on horseback for the entire battle as her magical attacks have good range and priority.