Granado Espada(usually referred to simply as Granado, or GE) (Korean: 그라나도 에스파다) is an Age of Exploration fantasy MMORPG developed by IMC Entertainment. Set in a detailed fictional gameworld that mirrors the 17th century and the European colonists' forays into the New World, the game allows players to explore the newfound continent of Granado Espada in a hunt for treasure, adventure, and fame.

The first English version of the game, distributed by IAHGames, began Open Beta Testing on May 17, 2007, and will soon move into the official commercial phase. Publisher K2 Network announced in January 2007 that they would be bringing Granado Espada to the North American and European markets in Summer 2007 under the new title of Sword of the New World. 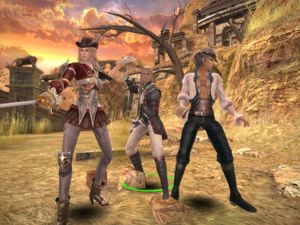 Granado Espada distinguishes itself from many modern-day MMORPGs with its Multiple Character Control (MCC) system. Rather than playing one character at a time, or using two clients to do so, a player may control a party of up to three characters in a single gaming session. This party play aspect of the game gives Granado Espada more of the feel of traditional, non-networked console and PC RPGs. The character order may be set within the Barracks at the beginning of the game, and any member of the party can be selected to lead the other characters or act alone at any time throughout the game. The other two characters can be commanded to follow or attend the lead character as the party moves through a given area.

There are various modes by which the party AI will automate the other two characters, among them an assault or attack mode, in which the scout or healer (if any) will automatically heal all members upon fighting mobs, and a defense mode for areas with a lighter concentration of mobs. The player is responsible primarily for controlling the lead character, while the other two characters will act and react according to the mode manually set by the player.

Players of Granado Espada will find themselves emblazed with options when it comes to battle, most characters within Granado Espada (With exclusion of characters like Summoner Catherine) have a multitude of stances to select from, level and switch in-battle. Stances basically represent what your character's style (and what weapon you're using), you can level the skills within each stance type until you max on skill point usage.

Within an actual fight, stances can be as simple as say: staying to one stance sticking within that for the duration of combat (typically in PvE) or using long-lasting abilities/buffs from another stance and switching back to focus invoking skills from your main stance. This becomes somewhat complicated in high-end PvE and PvP e.g. Combining Multiple stance attacks together for higher more consistent effects/damage, All the way to switching weapon sets to gain access to other stances and micro-managing your inventory for complex but optimal combinations.

he dungeons in Granado Espada are interspersed between towns and generally composed of three levels with successively more difficult mobs. In order to travel to a new town a player must often complete a series of quests that involve gathering items from a given dungeon level, or reaching the end of the dungeon. On the way the player will encounter a number of Waypoints or saved locations that may be teleported to for a fee and save him much of the journey back and forth. Each dungeon's final level terminates in a Mission Room, or a room in which a boss mob may be challenged by teams of players. Missions are instances, wherein players get their own "instance" or "room" of a specific map just for themselves, a technology developed by Richard Garriott and popularized by Guild Wars and to some extent World of Warcraft.

Quests are an integral part of Granado Espada, so much so that the player can only control a second and third character after completing a series of quests. Various NPCs throughout the towns and in some dungeon locations may be spoken with to initiate quests.

Once Knight status is granted via a quest, the player may unlock and access another difficulty level for dungeons he has already passed. Quest rewards range from "Vis" (the game's currency) to Family Points (also known as Ladder Points, used to expand the Barracks and create characters) and NPC Cards.

Granado Espada has a Dueling System by which a player may issue a challenge to another player's team and duel them in an arena removed from the actual game. Family Points may be earned or lost in a duel.