Grand Prix Legends is a PC racing title that simulates the 1967' F1 season. It's regarded to be one of the very best simracers ever released and has created a large loving online community that is as big as ever, even 8 years after its release.

Grand Prix Legends was released by Papyrus software in 1998. The game, designed by Dave Kaemmer was his most advanced car racing simulation to date and Papyrus did an amazing job on it. Unfortunately it was released in a time when current hardware was not ready for it, and lacked OpenGPL\D3D support, the minimum requirement being way below what was really needed for a smooth experience. As a result the sim didn't catch on until a year or so later when people had access to better hardware and steering input devices. Also, Papyrus released an unofficial D3D patch in addition to the community-made OpenGL patch existed. GPL was in a recent poll voted best PC Racing simulation, which is a testament to the game and its community.

The graphics of GPL has changed dramatically from when its release in 1998, from something that would look like your average PS1 game into a clean, good-looking game even by today's standards. The reason for this change is the community support, fans that has cranked out new textures for seven years, each looking better than the last.

GPL has a thriving online racing community with open servers to be found 24/7, even though leagues are the preferred way of racing online. 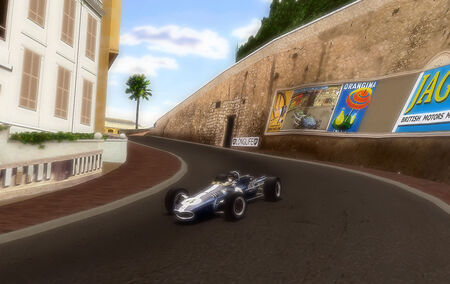 There is much to be said about GPL, most of which can be found here: