As the main character, you could hijack cars, get weapons, and mow down random people on the street, as with any Grand Theft Auto game. It is a complete sandbox game. However, killing many citizens needlessly will get the police after you. You could lead them on a chase, or manage to kill the police, but that would just send the SWAT team after you. Eventually, you'll either be arrested or killed. Being arrested consists of you being dropped off at a spawn point in the city with less money.

The weapons include machine guns, flame throwers, grenade launchers, and even a weapon that 'fires' electricity. The cars vary in their speed and handling, too. There are sports cars, pick-up trucks, ambulances, buses, fire trucks, and more.

The game takes place in a series of cities. To advance to the next city, which features more weapons and vehicles, you must first take over the city you are in. This is by becoming a high-ranking member in each of the gangs. The gangs in the city are all wildly exaggerated. From Yakuza, to cloned scientists. They form a triangle of hate, so working for one will anger the other. Or killing one will make the other like you. As you form enemies with a gang, they will attack you whenever you enter their territory.

You can also raise your gang ranking by going to their payphones and accepting their missions. These missions are where all the objective-based gameplay comes from. They can be escort missions, or ones that allow you to lead a group of your fellow gang members to a specific enemy spot to shoot it up. 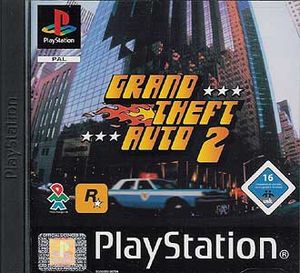