Graveler (ゴローン, Gorōn, Golone in original Japanese language versions) is one of 493 fictional species from the Pokémon franchise. The name "Graveler" probably originates from the word gravel, which is a stone substance used in construction, and the word traveler.

Graveler looks like a large boulder with lots of protrusions all over its surface, four arms and two legs.

A Graveler lives, and feeds on, rocky mountains. Its daily habits mainly consist of climbing the slope of a mountain, snacking on small rocks along the way, and rolling back down once it has reached the peak.

A Graveler grows larger the more rocks it feeds on. Although it partakes of a variety of rocks, it seems to prefer specimens which gather moss best of all. This is likely a pun on the saying "A rolling stone gathers no moss", since Graveler, a living rolling stone, eats the ones that gather moss, and hence do not roll.

When rolling down a mountain trail it ascended earlier, a Graveler is a very dangerous thing to encounter. A Graveler is by nature carefree; it is not essentially harmed rolling down the slope, even if the odd jutting piece on its body gets broken. Therefore, the Graveler does not care much which way it goes rolling down. It ignores most obstacles that may appear in its path, such as grass, trees, boulders or even hikers, since it can roll through or over them more often than not. The only time it bothers to change its direction is when it wishes to stop, when it will steer itself into an overlarge rock.

When not rolling down a steep slope, Graveler is far less dangerous. For one, its speed is greatly reduced, since it is not very fast just on its two legs.

The Machop species uses Gravelers as training weights. It is unknown what Gravelers think of being used as dumbbells, but taking their relaxed and carefree attitude into consideration, it is possible that they are not bothered.

Besides being evolved from Geodude, Graveler is fairly commonly encountered in the wild. In Pokémon Red and Blue, Graveler is found in Victory Road. Pokémon Yellow also makes it available in the Cerulean Cave.

In Pokémon Gold, Silver and Crystal, Gravelers can be spotted in Victory Road, the Dark Cave, Mount Mortar and Mount Silver.

In Pokémon Ruby and Sapphire, Gravelers are encountered by smashing rocks in Victory Road. In Pokémon Emerald, they are also found in Team Magma's hideout.

In Pokémon FireRed and LeafGreen Graveler can be found by smashing rocks in the Cerulean Cave, Mount Ember, Rock Tunnel, Kindle Road and Sevault Canyon.

Graveler is powerful offensively and defensively, but its speed and special defense are terrible. A special attack which it is weak against may knock it out immediately, especially water and grass attacks to which it is especially weak. Its Rock Head ability, which shields it from recoil damage, gives it an advantage when using Double-Edge. If things look bad, one might as well use Selfdestruct or Explosion.

At any of the Game Boy Pokémon games or the GameCube games, Graveler evolves into Golem only by trading it with a friend.

Graveler are also found in the Nintendo 64 game Pokémon Snap in the Valley Course. They will be hanging from the sides of mountainous cliffs and are somewhat difficult to lure down. One Graveler can fall off its perch if both Geodude nearby are knocked off theirs at the same time, and when Graveler lands on the ground a Sandslash will pop out of the ground. Later on, three Graveler can be lured down to the ground by playing the Poke flute, and they will perform a circular dance that can be photographed.

Graveler's first appearance was as early as episode #9 (The School of Hard Knocks) where star student Gizelle deliberately used one against Misty's Starmie (a water Pokémon), to show off its high level. Another one was used by invigilators at the Pokémon League Entrance Exam in episode #56 (The Ultimate Test). In episode #190 (Spring Fever) a man and his little daughter are using a Graveler's help when digging for hot springs.

Interestingly, there is an error in the Poké Rap. The singer says "Graveler" but the video shows a picture of its pre-evolved form Geodude instead.[1]

Graveler debuts in Onix is On! of the Red, Green & Blue chapter as a Pewter Gym trainer's main Pokémon, also another one is seen next to Brock, suggesting that he is its owner.

Brock gives Yellow a Graveler in Volume 4 that eventually evolves into Golem in Volume 7. 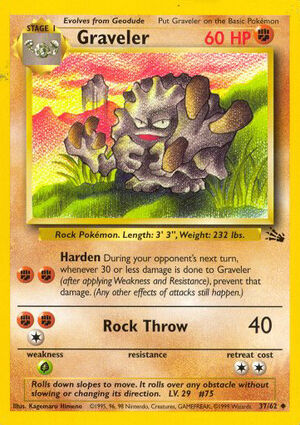 Graveler has appeared in the Pokémon Trading Card Game first in the Fossil series.