The Green Goblin is a popular villain from the Marvel Comics, specifically, the Spider-Man series. He most often relies on his glider, which not only enables him to fly, but also includes many in-built weapons. Off his Glider, however, attacks with paraphernalia such as pumpkin-shaped explosives and razors.

Green Goblin is a boss.

Green Goblin is the boss of stage 3-2. He flies back and forth on his glider and drops pumpkin bombs.

In the 2002 Spider-Man game based on the movie, Green Goblin is the main villain and the final boss.

In the end, Norman discovers Spider-Man's secret identity and captures Mary Jane, taking her to the top of the Queensboro Bridge. After Spider-Man saves her, the two battle in the bridge. Green Goblin stays most of the time flying around on his glider, and while in the ground he uses a variety of attacks. After defeat, Green Goblin reveals his identity to Spider-Man and asks him to forgive him. While Spider-Man is distracted, Norman attempts to kill him by making the glider hit him from behind, but Spider-Man's Spider-Sense warns him of the danger and he jumps to avoid the glider, which hits Norman instead, killing him.

In Spider-Man 3, Harry Osborn becomes the New Goblin to avenge the death of his father. He is a boss and an unlockable playable character. His abilities are similar to the original, having a board-like glider to fly, pumpkin bombs, razors, retractable arm blades, and a sword.

As a boss, the New Goblin attacks Peter Parker (Spider-Man) in the streets at night and they fight on his glider flying around the city. After a while, Peter will fall from the glider and he will fight him as a boss. When the New Goblin is defeated, he is hurt and Peter sends him to the hospital without revealing his identity.

In the final part of the game, Harry sees on the TV that Venom and the Sandman had captured Mary Jane and challenge Spider-Man to a fight, and goes out as the New Goblin to help them. The player begins in the top of his house and has 1 minute to reach the local of the battle. Once there, he helps Spider-Man save Mary Jane and faces a giant Sandman. After defeating the boss, the New Goblin jumps on Sandman's mouth and causes several explosions inside him, scattering the sand. He than goes to help Spider-Man face Venom, but Venom restricts him and his glider with his web and throws him out of the building, killing him.

In the beginning of the game, Green Goblin, Doctor Octopus, Venom and Sandman are fighting against Spider-Man and the New Goblin. Suddenly, all of them (excluding Spider-Man) are capture by P.H.A.N.T.O.M.s, and are manipulated by a device. Spider-Man later faces the Green Goblin in Tokyo and frees him from the mind control, joining Spider-Man.

The New Goblin has no further involvement in the story, becoming a playable character after completing the game. 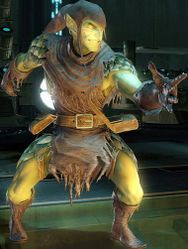 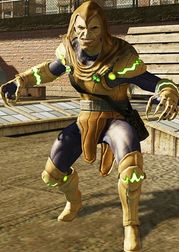 Green Goblin is a playable villain. After being defeated and captured by Songbird and her group reformed super-villains, Reed Richards injected him with microscopic nanites which allowed S.H.I.E.L.D. to remotely control his actions. However, this nanite network would eventually become large and complex enough to emerge as its own intelligence, which first manifested as a small bit of signal carryover between nanite agents.

He was one of the many nanite agents sent by S.H.I.E.L.D. to assist Iron Man in containing the Anti-Registration forces in an abandoned chemical plant. Near the end of the confrontation, however, he, along with Venom, Lady Deathstrike, and Bullseye came under the complete control of the fold, and gained the glowing blue eyes and tendrils of light hanging off their backs, traits that would become common for those subsumed by the fold. The four former villains turned on the nearest group of S.H.I.E.L.D. shield agents, presumably killing them, and took explosive devices from their belts, placing them on tanks of a highly explosive chemical. Unbeknownst to the Fold Agents, however, Nick Fury had sent one of his many Life Model Decoys (LMDs) disguised as a S.H.I.E.L.D. Soldier, and, along with a group of (Anti/Pro)-Reg heroes, managed to remove all but one of the bombs. Green Goblin and the rest were presumed to have escaped unharmed..

He and Venom were later sent by the Fold to aid in the attack on the Black Panther's palace in Wakanda. The villainous duo was defeated, and Reed Richards managed to devise a "cure" for the nanites, freeing them from the clutches of the Fold. They then swore temporary loyalty to the anti-Fold forces, and were later instrumental in its downfall.

The Green Goblin's alternate costume, unlocked by defeating 50 total foes, is of one of the many iterations of the Hobgoblin.