The name "Grimer" comes from the word grime. In this context, a grimer is someone who grimes, such as Scyther means someone who cuts. It could also be a play on the name Slimer (the green ghost who slimes people in Ghostbusters). Its Japanese name is a play on べとべと betobeto, the word for "sticky". Grimer evolves into Muk, which has the same sludgy theme. It loves sludge and anything particularly foul (hence its Stench ability).

Grimer is composed primarily of putrid, hardened sludge and grime. It smells incredibly foul, and can influence the abandonment of entire cities due to its polluting nature—even weeds don't grow where a Grimer has appeared. It likes hanging around Team Rocket for some reason.

Grimer thrives in filthy areas, such as factories, garbage dumps, sewers and polluted water systems. It survives and matures by sucking up polluted sludge that is pumped out of factories, adding toxic waste to its already toxic girth. It enters sewers and other areas with great ease due to its rubbery and semi-viscous body; for example, it can enter barred-off areas by slipping between the narrow bars. If you stick your hand in Grimer, it will be very hard to get it out.

It is unlikely that Grimer has any internal organs, as it was brought to life from sludge. It is believed to have originated from a polluted seabed. Another theory is a lab accident in a factory.

If Grimer gets attacked and gets split in half, it will either put itself back together or duplicate into more Grimers, meaning that it reproduces asexually. New Grimer are also formed from bits of sludge that Grimer leaves in its trails. Grimer also tend to fuse together, creating new poisons. Both of these tend to worsen its stench.

Grimer is comparatively stronger than many other Basic Pokémon that evolve, in terms of Hit Points and Attack stats. However, its other stats, particularly Speed and Special Attack, are very poor. For battle, trainers are best served by Grimer's evolved form Muk, but must be patient whilst training Grimer—it evolves into Muk at a relatively high Level 38.

Grimer are also found in the Nintendo 64 game Pokémon Snap in the Cave Course (which is not quite as dirty an area as the other locations where it is found in the other Pokémon games). If hit with three Pester Balls, they will evolve into Muk.

In the Pokémon animé, it appears with evolved form Muk in a deserted power plant where it encounters Ash Ketchum and friends. They corner Ash and co. but before they can do any harm, Magnemite and Magneton appear out of nowhere and shock the sludge Pokémon into submission. It later reappears in a flashback in the episode where Ash battles Erika, the Celadon City gym leader; the flashback concerns the story of how Erika met her beloved Gloom.

Koga wears a Grimer on his shoulder in the form of a ninja outfit in Pokémon Special. He used it extensively to smother Green, preventing him from breathing.

His daughter, Janine, is later seen with a Grimer. She uses it against Falkner during the Gym Leader faceoff, using its Minimize attack to outwit his Noctowl. 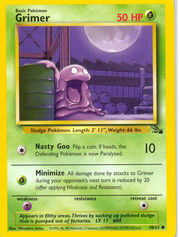 Grimer debuted in the Pokémon Trading Card Game in the Fossil set. It has since made numerous appearances in many sets, including both of the Team Rocket-based sets. Grimer has appeared in the following sets: