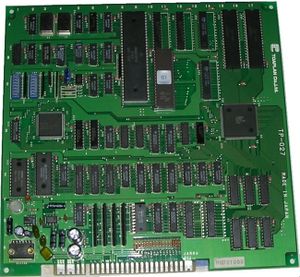 Grind Stormer (known in Japan as (ヴィ・ファイヴ?) V-Five) is a vertical scrolling shooter developed for the arcade by Toaplan, and ported to the Sega Mega Drive in 1993 by Tengen. It is considered a successor to Slap Fight as it uses a similar power-up system. The player assumes the role of an arcade player controlling the NA-00, a space fighter on an alien planet destroying every enemy in its path while amassing a score and surviving a merciless checkpoint system.

The game takes place in the year 2210 where 'the ultimate arcade machine' Grind Stormer/V-V has finally been released. A VR shooting game, Grind Stormer/V-V becomes so addicting that the government assigns a young man to investigate the arcade phenomenon in order to question it's true purpose and to perform the impossible: to beat the game.

The game was released on the Sega Genesis/Mega Drive as a 2-in-1 package: players could choose to play either V-V or Grind Stormer, but the only real difference was in the power-up system: In Grind Stormer, the players had the normal weapon layout with instant power-ups and Bomb icons (gems). This game version also had Speed-Up icons as well as Speed-Down icons and points items. In V-V, the players collected gems that allowed them to choose power-ups, weapons and even a shield icon in a menu screen a la Gradius. The ship also had Options that accompanied it at all times to provide cover fire. This game version had the Speed-Ups available only as a selectable power-up.

Shot - The standard Vulcan weapon, the Shot beam could fire in three different directions, but when the ship's Options moved together the smaller shots would converge into one large beam. This was the ship's default weapon.

Search - A weapon that only affected the Options, this would turn the Options into homing devices that sought out any enemies on the screen (even if they were invulnerable). This item would turn the ship a light violet once equipped.

Missile - This weapon fired non-homing rockets: the rockets' advantage was in their incredible firing rate. This item would turn the ship blue once equipped. Options would follow the ship in a manner similar to segments of the 'Snake'.