Growlithe (ガーディ, Gādi, Gardie in original Japanese language versions) is one of 493 fictional species of Pokémon in the Pokémon franchise. Growlithe's name is derived from the words growl, because it growls at its enemies, and lithe, which refers to its readily bent posture before it attacks them. Its name in the beta version was Flamie.

It basically looks a little like the shisa and an orange puppy with black tiger-like markings along its back and rear legs. On its front legs it has a pair of black "V"-shaped markings. It also has cream-colored fur on its tail, chest/muzzle, and head. As a puppy Pokémon, Growlithe is known for displaying many of the talents for which dogs (and puppies) are known. Growlithe is a very sweet Pokémon, and it loves whoever owns it. To this end, Growlithe will try to protect its Trainer from anyone it doesn't know, including its owner's relatives, so Growlithe should be properly trained before introduction. Growlithe has keen senses of smell and hearing, and is intelligent. It is also quite rare and hard to catch, due to its Roar attack. In the wild, Growlithe are very territorial.

Despite being very playful, as has been shown in the Pokémon Animé, they can also be quite fierce. They are very cute and will lick your face if you are nice to them.

Out of all the Advance Generation games, Growlithe can only be found in Pokémon FireRed and Pokémon XD: Gale of Darkness; and in Pokémon Red, Yellow, Gold, and Crystal in older-generation games. In FireRed, it is uncommon and can be found in routes 7 & 8, the Pokémon Mansion - floors 1, 2, 3, and Basement 1. In XD, it can be snagged from Cipher Peon Humah in the Cipher Key Lair. Growlithe evolves into Arcanine with a Fire Stone. Its abilities are Intimidate and Flash Fire. Intimidate, upon entering battle, causes the opponent's Attack to lower one stage. In a Double Battle, both opponents' Attack are lowered. Pokémon with the Clear Body, Hyper Cutter, or White Smoke ability are unaffected. In a link battle, if both sides switch on the same turn, and first player sends out a Pokémon with Intimidate, the opponent's Attack will be lowered before the opponent's Pokémon switches. Flash Fire, on the other hand, activates when user is hit by a damaging Fire-type move (including Fire-type Hidden Power). Once activated, user's Fire-type moves deal 1.5 times damage. While this ability is in effect, this Pokémon is immune to damage from Fire-type attacks and Fire-type Hidden Power—accuracy and effect from these moves are ignored. For Fire-type Pokémon with this ability, Will-O-Wisp activates this ability without having an effect. If a non-Fire-type Pokémon has this ability, Will-O-Wisp will activate the ability and will have an effect.

In Pokémon Snap, Growlithe may jump out of the three erupting volcanoes at the end of the Volcano course, if a Pester Ball is thrown inside accurately enough.

Its cry is also similar to those of Machoke and Machamp, being in pitch in between the two.

In the games Pokémon Gold and Crystal, you can find Growlithe in the route just under Ecruteak City.

In the anime, Growlithe (and their evolution Arcanine) appear several times as police dogs working for Officer Jenny. James of Team Rocket also owned a Growlithe named Growlie as a child. James left Growlie behind when he left home, so it could look after his parents. Growlithe has made his latest appearance in the Hoenn League as one of Ash's rival Morrison's Pokémon. Growlithe's first appearance was in episode 33, The Flame Pokémon-athon, where it was a protector of a Pokémon reserve that rests between the Fuchsia Gym and the Safari Zone. Three Growlithe have also made an appearance in episode 416, On Cloud Arcanine, as the children of a wild Arcanine. Also, Ash's rival, Gary, has an Arcanine.

As of Volume 4 of Pokémon Special, Blaine is seen to have a Growlithe. 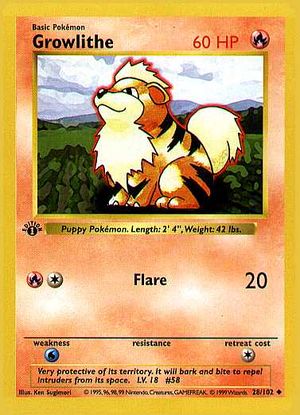 Growlithe has appeared in many Pokémon Trading Card Game sets.