Gundam: Senjou no Kizuna, officially known as Kidō Senshi Gundam: Senjō no Kizuna (機動戦士ガンダム 戦場の絆, Mobile Suit Gundam: Bonds of the Battlefield), is an arcade game made by Namco Bandai and Banpresto. It is a P.O.D. style arcade game allowing 8-16 players to compete in teams of 4-8 members over a nation wide network. Gundam: Senjou no Kizuna is currently only available in Japan and Hong Kong. It was released in Japan on November 7, 2006, in Hong Kong on April 19, 2008 and in Singapore on August 31, 2009. Namco Bandai have not stated whether they intend to release the game in any other regions.

P.O.D stands for Panoramic Optical Display. The PODs are the individual cubicles that you actually play in. They can only seat one, and most arcades won't let a friend observe from inside the POD either. The PODs are fitted with a dual-lever and dual-pedal control system, a 180º projection screen, surround sound, and a headset jack. The seat is adjustable and should be able to fit most tall people. The lights outside the POD give you its current status. A green "In Operation" sign means it's currently being used; don't open the door or disturb the player inside. Two long light strips will be either blue or red indicating the player's faction. Blue is EFSF, Red is Zeon. If the strips are purple, it means the POD is free for use. If the strips are flashing your faction's colour, it means you can join a game about to start in your arcade by inserting your Pilot Card right away.

Each session consists of two matches, each 250 seconds long. Dealing damage in-game gives points to the pilot while destroying an enemy mobile suit gives further points depending on what suit was destroyed. More points are awarded for higher valued mobile suits, while if a player is destroyed, some points will be deducted from his/her score. Additionally, pilots receive small boosts of points when allies destroy mobile suits. Bars on the left side of the screen (blue for Earth, red for Zeon) display the overall battle strength of the teams. Destroying an enemy depletes the bar according to the cost of the mobile suit that was destroyed. Additionally, should a team's base (kyoten 拠点) be destroyed, a considerable amount of bar is depleted. If the bar is completely depleted before the end of combat, that side loses and the other wins the match. A draw game occurs if both bars are even at the end of the time limit.

Since the latest revision, the Pilot Card has been replace with the general use Banapassport. Data from the old Pilot Cards can be transferred via the Pilot Terminal. Like the Pilot Card, the Banapassport stores all of your personal data. Unlike the previous versions, the latest update to the game has allowed for guest play access for those who do not have a Banapassport. However, guest play gives limited access to mobile suits and maps, and personal information such as pilot level and rank will not be stored. Also, the first tutorial launch map has changed from 'Side 7' to the 'Australia Training Base', and the computer will group novice players with other beginners in the tutorial if possible. 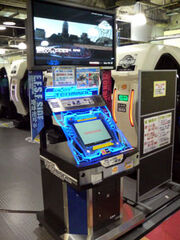 You will have to update your Pilot card at the end of the game at the Pilot Terminal. It also allows you to check your current MS e.g., remaining exp to next level, usage percentage and available equipments.

A card that you must have in order to start the game. It records your Location, Nick, Rank, Pilot Points and the number of MS kills.

Earth Federation Space Force, the only side that allow you to pilot Gundam. But take note of the cost of Gundam.

Principality Of ZEON has MS advantage against the Federation even they did not have Gundam in their MS list. MS like Gyan have the speed of Gundam RX-78 and it's easy to get and cost less compare to Gundam in Federation.

Pilot creation starts when you want to make the Pilot Card. During the creation of the Pilot Card, you will be prompted to choose the voice of the pilot (this voice will be the one that you'll hear when you use the macro chat function in game), the pilot suit (basically the helmet style of the suit not the actual suit itself) and your name.

Each battle rank you receive will give you Experience Points, used to unlock new MS. These experience points are different to the points earned for piloting individual MS to advance levels. The higher the rank, the more points you receive. Unlike MS pilot/leveling points and rank advancement points, the only way to track MS rank points is through subscribing to the game cell phone website and checking your pilot information details.

The Experience tree is as follows:

All units starts with the basic weapon loadouts. For example, the Zaku II is initially equipped with a 3 round burst machine gun, grenades and a tomahawk. As the player continues using the unit, he gains stat points with it. Accumulating a certain amount of stat points unlocks additional weapons, which can be chosen at the loadout screen. In the aforementioned example, the Zaku II can be additionally equipped with a bazooka, a 6 round burst machine gun and a missile pod.

Generally a mobility enhanced unit can dash and fly longer, is more agile while has slightly less health. Conversely an armor enhanced unit has more health, but is generally less agile. The amount of stat modification depends on the level of upgrade chosen, and the stats of each individual unit.

Like unlocking weapons, a player receives stat points when he plays with a particular unit, and gaining a certain amount of points unlocks a slot of the upgrade, which can be chosen at the terminal. The "tree" of unlocking weapons and mobility / armor upgrades are the same.

There are two methods of communication between teammates available while playing.

The first is a set of in-game quick-chat options. These pre-set phrases (entered by highlighting and selecting via the control panel- a simple set up consisting of one round blue button and two yellow up and down arrow buttons, found to the right of the right control stick, above the I.C. Card insert), are used to both communicate basic information, ranging from simple greetings or requests, to more advanced orders given to members of the squad to coordinate attacks. In the event that your team consists of any AI controlled members, giving these orders will actually command them to preform specific actions. Otherwise, human members on each team are expected, but not required, to follow orders when given (this is more so the case when playing with other pilots over the nationwide network). Knowing the right time to give certain commands can mean the difference between victory and defeat. See the Chat/Command reference chart below for specific details.

The second is a convenient method of simply talking to the other members of your team via mic-equipped headset (the set up for which is found on the right wall of the P.O.D., directly beside the pilots right elbow, above the coin insert slot). It is a simple interface, consisting of inserts for the headset (pink for microphone, green for headphones) and +/- buttons for volume control. In most arcades, it is common to find headsets provided, but thanks to poor equipment performance (or in some cases, theft of the initial equipment provided with the game), it is recommended that if your are planning on using this communication method, that you bring your own headset with you.

As this option is only available via local area networked games, the requirement is that the other pilots on your team must be present in the same arcade with you. While it is common to find 2, 3 or even 4 pilots playing together on teams at some arcades, in arcades with several linking P.O.D.s, it is possible to have up to 8(?)[verification needed] pilots linked by voice communication. During the pre-launch sequence before each battle, pilots playing on local area networks with teammates are indicated by a colored line behind their pilot number. It is more than likely that these team members will be utilizing linked voice-chat as well.

(Communication and commands issued to team mates via the console found to the right of the right control stick. CPU controlled team mates will obey orders given via this method). △ ▽ = up and down buttons, O = Start button.

These match rankings are no longer correct due to a game update.

the gundam game has been updated recently so most of this info is no longer good but the basic mechanics of the game have not changed and it no longer cost 500 yen to play now its 400 yen or 300 yen depending on where you go, EX: local arcades make gaming cheaper while big places like Akihabra = way to much!

In order to get three or four hit combos you first need to decide which type of moble suite you are going to use. the close range moble suits(they have a red icon in the moble suit selection window) have the unique ability to use a 4 hit combo or higher depending on the type of weapon you use.

the rest of the moble suits (orange/green not including the long range) have the ability to do a 3 hit beam saber combo.

In order for your 3 hit combo to work you need to time your beam saber hits one after another. EX: once you get your target lock on with the beam saber you press the left trigger then DURING the saber hit press your beam trigger button again and the same so on until you use up all your hits.

for the 4 hit combo you need to do the same as the three hit but on the third saber button hit press the machine gun/beam gun trigger located on the right control stick.

timing the hits is important because if you don't you'll only abruptly stop attacking on whichever hit you are on. A good way to get your hits is count the button press every second EX: one Mississippi, two Mississippi, three Mississippi.