Gunz The Duel, more commonly known as simply Gunz is a third-person action game, though with mostly shooting elements. It was created by the Korean company MAIET.

The game uses the typical PC FPS control scheme: WASD and Mouselook. However, there are also a variety of moves not found in typical FPS games, such as the ability to run along walls, backflip off walls, and do various tumbles and dashes.

Players create a character, and then by gaining experience points and money, buy new equipment. Equipment includes various clothes for defense, and different kinds of melee and ranged weapons.

When wielding melee weapons, such as the default Rusty Sword, players are able to slash consecutively at close range, dash forward, backward, left or right, and temporarily block any bullets aimed at their upper body. There are also two other moves they can use: A charged attack and a stun attack. Charged attacks are done by holding down the attack button (default is left mouse click) to store it, and then doing another attack within a certain amount of time to let loose a large explosive slash. If a player blocks any melee attack with their weapon, they are given a shorter lived charge attack. Stun attacks are done with a right click, and vary with each weapon. They almost always knock the enemy down, and cannot be blocked. Enemies can avoid falling by jumping in mid-air to land on their feet. 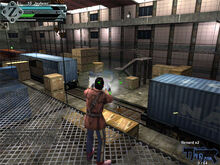 A large shoot out at the station map.

They can also be used to climb by holding the right mouse button in the air when near a wall. The players character will stab forward, and as long as the button is held, will hang on to the wall. From there, the player can continue to jump and stab the wall until they reach the glass ceiling.

Ranged weapons are basically guns. They can be dual handguns, erratic but rapid-fire machine guns, various shotguns, and more. When wielding guns, players cannot block or dash. Instead, they can tumble forward, backward, left, or right. The difference is that players can still attack while tumbling.

The jump key and jumping moves are important for flashy and stylish kills (which give you bonuses) as well as avoiding attacks. Players can do a variety of Matrix-like moves, without the bullet time. They can run up walls, bounce off them in any direction, or run along them. When wall-running, players can also attack, though attack with melee weapons will stop the wall-run. 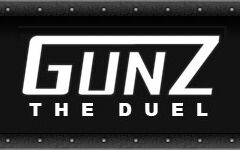 This is the Astra Continent, the world of fantasy, where a strong push toward modernization followed Industrial Cataclysm.

It is up to you to face the notorious outlaws and bounty hunters in battle, spy on your enemies and other adventurers, who wander around the world testing their strengths and powers. It is up to you whether you decide to compete and fight against them, or join hands to help them.

You must now set foot on your journey as an adventurer - keep watch for the secret treasures handed down from generation to generation from the ancient times, they may aid you in your quest.

However, be warned! This adventure comes not without risk - and you never know what surreal existences you may encounter on your path!

What is an Alternative Shooting Action Game?

GunZ is very similar to other FPS games widely available. However, it also contains elements that are totally different from any other existing FPS games.

A number of different actions are available in GunZ, like the ones offered in console games or seen in movies. Ranging from dashing, wall jumps, tumbling, hanging from the walls, multi-step jumps on the walls to the combinations of actions using swords or guns, there are plenty of actions available. GunZ appeals to not only the sense of "SHOOTING" but also to the feeling of "MOVEMENTS".

The battles unfolds not only on the ground but also on the walls, columns and even the statues. You can step on, run on, and jump off the walls and columns making use of a variety of skillful actions. Experience and create an all new strategic play with GunZ!

Creation of Diverse and Unique Characters

GunZ has a variety of character models to choose from. That's not all. You can also equip a number of different clothes and items depending on your personal tastes. Once you equip items, your avatar will also look different depending on the ones you have chosen. GUNZ supports 12 item slots in total, which allows the players to customize fully their chosen avatar.

A Variety of Weapons and Items Supported

You can select weapons as well as clothes and accessories. Choose the weapons that you want and join the battle. You can dash at your enemy whilst being equipped with a variety of arms: pistols, rifles, twin guns, machine guns and more!

In addition, many weapons are offered for close quarters combat. You can use a long sword to suspend yourself from a wall or propel an enemy skyward. If daggers are more your style, you can dash about and stab your enemies from behind. All the weapons are available in a variety of designs and colors too, so you can use the weapons as fashion items as well.

The developers continue to expand the world of GunZ every day. As an action game with a touch of a role playing game, GunZ will continue to introduce more diverse and interesting role-playing elements rather than simply offering more level-up opportunities for the players.

The North American edition of GunZ on the ijji.com website is the full version for international users. All users play this version other than people located in a country that has their own version for example, Korea. All Korean IP addresses are blocked from playing NA GunZ. ijji has been hosting clan tournaments where clans compete to be the best and win offline prizes such as iPod Nano's, Nintendo DS and more. Past tournament winners were Strike¡£, Basic and Sparta respectively. ijji's version of GunZ is a lot different then the original Korean Edition. Because Korea is so small, Korean GunZ gets very low "ping" or latency. Where as the North American version gets pings ranging up to the 200's just because of distance issues because people all over the world play.

Industrial Cataclysm and the Start of a Republic

Time passed by and then a strong wind of change started to blow toward Astra. Around 100 years ago, a machinery civilization called industrial cataclysm started to be introduced to the region. This eye-popping change sparked by the invention of a steam engine brought drastic changes not only in agriculture and industry but also in every other corner of the society.

Transportation went through great revolutionary development and those who entered into the transportation business grew to accumulate huge capital and wealth. Citizens of Axium who had a long belief that being loyal to power and the authority of king was everything started to realize that capital represents another power or authority. Now appeared those kinds of people who adopted different ideologies that could undermine the safety of society. Meanwhile, gangsters looted the steam engine trains and outlaws that enjoyed gun sightings. All these drove the Empire into an unprecedented chaos.

As the group of bankers, merchants, lawyers grew to have the power equivalent to that of the nobles consisting of the royal families, nobles and the priests, the brains of Axium were divided into two group: 1) a conservative one that branded the nouveau rich as the force posing a threat to the society and looked down on them as slaves and the machinery civilization; and 2) the reformers who insisted the capital and the development of the civilization should be accepted with modesty.

Then, about 60 years ago, the Crown Prince of Baron, an extreme conservative and strong believer of the divine rights of kings succeeded to the throne. This led his younger brother and reformist, James, to take his followers to the south of the continent called Ilys to establish a republic under the name of Travia, for which he was selected as the first President.

It was about 60 years ago when the Empire suspended its attack on the Republic after a huge amount of blood was shed, and the two parties signed an armistice. This allowed the people to enjoy a moment of peace.

Even though the war was halted, each country kept on building their own military on a psychological warfare.

Amidst this confusing situation, there came a group of anarchists centered around the regions with low populations. Though they called themselves anarchist, both the Empire and the Republic called them outlaws. With no distinguishing leader at its center, the number of anarchists who lived with looting and surprise attacks kept growing in the midst of the confusion of the society.

There emerged a hero in the Empire, whose power sagged with time. The master magician, Ramitz, started to pay attention to the power of magic, which had been forgotten by the people after the advent of industrial cataclysm. Dreaming of the reconstruction of the Empire that declined after Ryswick, he accelerated his research on the magic with strong support from Baron and strengthened the army of the Empire. With the support of the stronger military force, he started to suppress the anarchists in the country. The emergence of Ramitz and subsequent appearance of a strong force irritated the Republic. They belatedly launched on the research of the magic in secret and developed its own system.

It is against the backdrop of the continent that there emerged a number of people who were willing to test their own power, becoming quite renowned in the continent as brave adventurers.

Before downloading and installing GunZ, please ensure your system specifications meet or exceed the following. Your computer must meet these minimum requirements in order to play GunZ.