Gyarados is the fictional evolved form of the Water Pokémon known as Magikarp and in order to evolve him, level him up to at least Level 20. In the animated Pokémon series it is a fierce, sea-dwelling Pokémon which is never submissive in battle. Although Gyarados is part Flying-type the only Flying-type move it can learn is Hidden Power Flying.

Gyarados is derived from the Chinese/Japanese legend of the Dragon Gate waterfall, which holds that carp who leap over it will become dragons. It is said that less than one in ten thousand carp manage this feat. Magikarp have been shown using waterfalls to evolve in Pokémon Snap and the Pokémon Trading Card Game.

Gyarados's name may be derived from a combination of 虐殺 gyakusatsu massacre/slaughter, and 逆境 gyakkyō, hardship/adversity. Both words relate to the creature's violent nature and the hardship it experienced before evolving. The dos may just indicate that it's the second in its evolutionary line. It could also be a reference to the Japanese ドスdosu, the sound of stabbing or biting. This would certainly fit in with Gyarados's violent nature and sharp fangs. In the beta version of the games, it was called Skulkraken (a reference to the legendary Kraken, which ruined sailors in a similar way to Gyarados)

Gyarados is a big change from Magikarp, the Pokémon from which it evolves. Unlike Magikarp, whose most powerful move is Flail or Tackle, Gyarados can learn some very powerful attacks, such as Hydro Pump and Hyper Beam. In appearance, Gyarados is basically a cross between a dragon and a fish, thus it resembles much like a Chinese "Dragonfish". It has a long serpentine body, Godzilla-like fins on its back and the sides of its head, two whiskerlike feelers and a constant scowl on its face. Its mouth is assumed to be constantly open, as it is normally depicted as so.

Gyarados tend to be very aggressive, and are powerful enough to destroy entire cities. They have a reputation for appearing where there is conflict, and shrivelling everything up with its Hyper Beam. Rampages like this have been known to last upwards of an entire month, and will not end until everything around them has been destroyed. Because they have been known to sink ships as well through the seastorms their rage causes, they are considered legendary among sailors. Its big change in behavior is said to be attributed to a structural change occurring in its brain while evolving from Magikarp.

As many Pokémon share cultural similarities with other products, Gyarados bears a striking resemblance to Leviathan, the summon monster from the Final Fantasy series.

Red Gyarados are a particularly rare variety of Gyarados. While Gyarados are normally blue in color, there are some rare red scaled Gyarados, also known as Shiny Gyarados. Shiny Pokémon are Pokémon with a different color from the common form. Though no more powerful than their more common blue counterparts, red Gyarados are valued for their rarity and individuality.

In the GSC continuity, Team Rocket attempted to broadcast a transmission (from their base outside Mahogany Town) that would make every Magikarp in the nearby Lake of Rage evolve, thus upsetting the lake's balance and making wild Gyarados rampage. The player and Lance foil their plans by knocking out the transmitter's power source: Electrodes.

The reason for the radio frequency forcing the Gyarados to evolve is most likely because it incites vast untapped feelings of rage. This may indicate that Magikarp evolve into Gyarados when they learn to tap into this area of rage. It also indicates that Gyarados are genetically predisposed to anger, which explains their seemingly insatiable desire to destroy.

As far as anatomy and physiology are concerned, red Gyarados are practically identical to their blue brethren. The main difference is the red pigment in their scales. According to the anime, this is because when Magikarp are forced to evolve prematurely, they do not undergo the conversion from red to blue scale pigment. Thus, they retain the same color they had as a Magikarp.

A Red Gyarados is mentioned in Pokémon Diamond and Pearl, but it is not seen. Though it can be seen in the wild, but rarely the same with its prequels.

Gyarados first appears in Pokémon Red and Blue. It evolves from Magikarp. Gyarados has been obtainable through normal means in every main Pokémon video game released to date. While Magikarp has particularly low stats and can only learn three attacks, Gyarados has much higher stats and can learn a variety of attacks.

In Pokémon Gold and Silver, a Shiny Gyarados (referred to as a red Gyarados) is visible on the overworld map at the Lake of Rage. This Gyarados is the only Pokémon that is always shiny.[citation needed]

Gyarados appears in the first episode of the saga, in the river.

Although Misty likes all Water Pokémon, Gyarados are an exception. This was a result of a bad experience as a baby when she crawled into a Gyarados' mouth, and nearly got eaten. She later had to overcome her fears in order to take control of the Cerulean City Gym. It then joined her team when she visited Ash in Hoenn. Misty's Gyarados is capable of using Flamethrower in addition to its Water-type attacks. Misty often shows it a sign of affection by kissing its Poké Ball upon release.

When Ash and Pikachu were chased off a waterfall by an angry flock of Spearow in the first episode. A Gyarados was swimming towards Ash and he swerved away just in time.

When the S.S. Anne sank, James used the Magikarp he had bought earlier from a salesman to escape, but when he later discovered he was conned since the Magikarp was weak and inedible, he kicked it into the sea, and it evolved into a Gyarados and attacked everyone with its Dragon Rage attack (also calling forth more Gyarados to do so). A Nurse Joy in the Orange Islands also had a large Magikarp that evolved, but this one was much friendlier to the person who had cared for it for so long.

In Pokémon: The First Movie, a trainer named Corey owned a Gyarados. He says that he got to New Island by using his Gyarados's Surf ability. Ash then says to him that "it takes great skill to raise a Gyarados". When Mewtwo appears, Corey has his Gyarados attack him, to no effect of course. Later in the movie Gyarados is cloned by Mewtwo and, like the rest of the clones, Gyarados and his clone fight each other. Surprisingly, although Gyrados are normally violent and insolent in nature, the two were seen crying for Ash when he was incapacitated by Mew and Mewtwo in the movie.

The Red Gyarados made an appearance in the anime in a story close to the plot of Gold, Silver and Crystal. The Red Gyarados was captured from the Lake of Rage by Team Rocket. It was later found that Team Rocket intends to use the radio frequency that induces evolution in the first red Gyarados to evolve all the Magikarp in the lake. Ash Ketchum, teamed up with Lance, were able to stop them. Lance managed to capture it, and later used it during the battle between Groudon and Kyogre.

Team Rocket also used a Gyarados-shaped submarine in early episodes, but for unknown reasons soon traded it for a Magikarp-shaped submarine, perhaps reflecting the changing perception the writers had of them.

Another instance with a Gyarados involved May, Max, and Professor Oak finding one asleep inside an underground lake that Team Rocket had turned into their fortress. While the three escaped quietly, Team Rocket's bickering a bit later on woke the Gyarados up, and the three were quickly punished by the angry serpent.

It also appeared in the final Advanced Generation Opening, Spurt, who was defeated by Ash's Corphish.

Unlike most Pokémon, Gyarados doesn't say its own name, it only roars.

In Chapter 4, Gyarados appears to be Misty's Pokémon, which was controlled by Team Rocket, Misty tries to calm it down but totally lost control and it attacked Misty and her Staryu. Red came to the rescue with his Bulbasaur, which was completely resistant to the Gyarados's Hydro Pump. It incapacitated it with Leech Seed.

In Chapter 25, Misty traded her Gyarados for Red's Krabby, and Gyarados became Red's new and sixth Pokémon partner as they go in search for a legendary Articuno. It seems that it falls in love with the beauty of Articuno.

Blue has a Red Gyarados, which he caught at Lake of Rage.

In Pokémon: The Electric Tail of Pikachu, Misty's Gyarados is her favorite Pokémon, evolved from her very first: a Magikarp that she caught and raised. 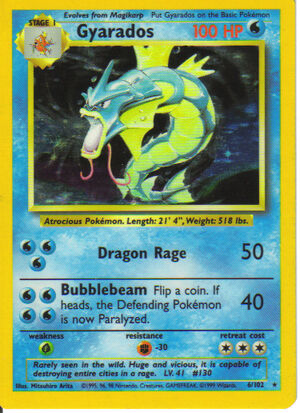 Gyarados, as seen in the Pokémon Trading Card Game

Gyarados is a popular Water-type Pokémon in the card game because it has made many stage-1 appearances with strong attacks since the game’s beginning. The following list shows all of the sets it appears in: