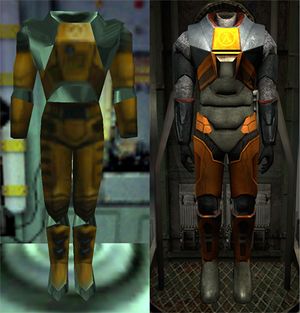 The Mark 4 and Mark 5 HEV suits as seen in Half-Life and Half-Life 2 respectively.

The HEV suit (or HEV Mark 4/5 Protective Suit, or Hazardous EnVironment suit) is the armoured suit worn by Gordon Freeman throughout the Half-Life series games where he makes an appearance. The Mark 4 is used throughout the first Half-Life games and an improved version of the HEV suit, the Mark 5, with slight modifications explained by Dr. Kleiner in the first Half-Life 2 game. This explanation is briefly interrupted when The Citadel enters maximum alert.

It has an energy storage system, and powered deflectors that reduce the damage Gordon takes while there is stored energy. It also has a built-in flashlight.

The HEV Mark 4 appeared in the original Half-Life game. It protects the wearer from harm, and retrieves its charge from standard HEV charger stations and portable power cells. The flashlight within the HEV suit uses its own rechargeable power supply.

The HEV Mark 5 is a modified version of the suit. It now accepts recharge from combine power stations, and gives a few more options with the auxiliary power. In addition to flashlight charge, the auxiliary power also provides oxygen and allows sprinting at faster speeds.

In Episode 2, the HEV suit begins to use a separate power supply for the flashlight.