Halo Wars is a real-time strategy video game initially only released for the Xbox 360, later released via Steam for Microsoft Windows as Halo Wars: Definitive Edition. It was Ensemble Studios's last project before the company closed. Halo Wars is set on the planet Harvest and added tons of new vehicles to the series. Halo Wars was released on February 27, 2009 in Europe and March 3, 2009 in North America for the Xbox 360.

The UNSC Spirit of Fire combats the Covenant on Harvest. Joseph States Contact Harvest was not written because of Halo Wars. The ships A.I is Serrina and the captain is Cutter. The Halo Wars announcement trailer showed that Spartans would be in the game, John 117 (a.k.a Master Chief) is not in the game. Johnson could be due to the fact that he is in Contact Harvest. 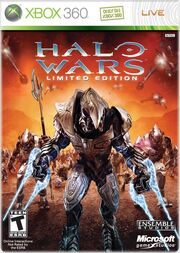 The camera starts of on a convoy of marines that have lost contact with recon and are on their way to recon's last position. The camera flashes to recon's position were they are running out of a structure what looks to be a Forerunner design. After the humans run out the door plasma bolts follow them, killing one and injuring another. Then a cloaked elite stabs the surviving marine with an energy sword. The convoy then reaches the structure and engages the covenant army. It then turns in to a big battle between the UNSC and covenant with the UNSC deploying a forward base and then the camera switches to a Spartan II and zooms out and reveals Spartan Group OMEGA. Then the spartan says "If they want war, we'll give them war"