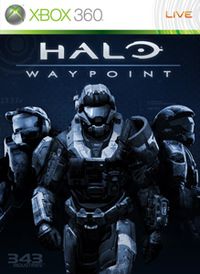 Halo Waypoint provides users with various kinds of Halo information, including information on members of the Halo community, various Machinima videos and gameplay strategies and tutorials. It also allows players to access their own gameplay-related data, tracking "milestones" and progress through multiple games in the series.

Halo Waypoint consists of new updates and features every day of the week, with each day highlighting a different aspect of the Halo Universe. Such as;

Halo Waypoint displays a player's progress through the Halo games using milestones and awards. Career Milestones are achieved as a player's Halo gamerscore increases. Halo 3, Halo 3: ODST, Halo: Reach and Halo Wars all support milestones, and future games will support it as well, although Halo 2 Vista and its achievements are currently not supported. Originally there were forty milestones but on January 6, 2010 it was raised to fifty via a title update and was raised again to 60 on September 8, 2010 via a title update. Earning achievements can also unlock Avatar awards.

Halo Waypoint also offers Halo-related news and grants access to exclusive content. Such content includes podcasts, trailers, screenshots, sketchbooks, videos, and, as previously mentioned, exclusive previews of Halo Legends. It has also been confirmed that full episodes of Halo Legends will be available on Halo Waypoint. Though they are free and require no downloading, though they are usually only on Waypoint for a single day.

The Fiction content contains articles and videos by former Ascendant Justice staff, Vociferous and Cocopjojo, each detailing a specific aspect of the Halo universe. There are five sub-categories to the Fiction content, Characters, Armory, Ships, Locations and History. The most common format of these entries is a written article, containing a gallery of related images, usually screenshots from the Halo games. Some entries include only a video, and in some cases, an intro video and three written parts.

The weapons, vehicles and equipment found within the story of Halo.

The individuals and players found within the story of Halo.

The different species and organizations found within the story of Halo.

The events, military operations and technology which shaped the story of Halo.

The galaxy-spanning places which are visited during the story of Halo.

The fleets, ships and other space-faring vehicles which exist within the story of Halo.

Halo Waypoint Awards are awards earned in Halo Waypoint. They are unlocked by playing Halo games in the series and currently include Halo 3, Halo 3: ODST, Halo Wars, and Halo: Reach. The awards unlock unique Halo related avatar accessories and in-game unlockables. There are currently 15 avatar items and vary from a Monitor prop to armour variants such as ODST helmets .

To encourage players to use Waypoint, several Awards (accessories for the player's Xbox Live Avatar) can be unlocked through Waypoint. To unlock an Award, the player must complete a specific task in one of the Halo games and then log in to Halo Waypoint.