Harvest Moon: A Wonderful Life is another entry in the Harvest Moon series of farming sims/RPGs. Many of the same gameplay elements are intact, such as cow caring and marriage. However, days are now much longer, around 20 minutes, as opposed to the quick three minute days of old. Because of this, your character doesn't really spend years on the farm, it is instead divided into chapters. It is different from previous Harvest Moon stories because of its attempt to tell the story of an entire lifetime, as opposed to just a straight endless farming sim.

A very similar version of the game, except with a female lead character and male characters to court, was released a year later, called Harvest Moon: Another Wonderful Life.

You play a young boy (Default name is "Mark") who inherits a farm from his deceased father. Mark did not know his father very well, but he does know that with the help of Takakura, he bought and took care of that farm. However, he never accomplished his dream of having his farm be successful. When he passed away, he asked Takakura to ask his son to live out his dream for him.

Mark moves to the farm to find it basically empty. Takakura helps him get a start with tools and a cow, but the rest is up to Mark. He must raise a profit, fill up the farm with crops & animals, and raise a family.

Standard Harvest Moon series gameplay here, though it has the most significant changes compared to other games in the series. As previously mentioned, days are about 20 minutes long. You spend these 20 minutes wisely taking care of chores that need to be done on the farm. Seasons are even shorter - 10 days.

These chores are basically taking care of crops, taking care of animals, harvesting crops, milking cows, gathering milk, and shearing sheep for wool. On some days you'll find yourself planting new crops or tilling the field if you want to expand your growing space. Once you get done with that, it would serve you very well to go and become friends with lots of people in the nearby town. Eventually, you'll be so tired that you need to sleep, because you'll run out of stamina and can't do anything. Sleep is about 6 game hours. Then it's time to start the cycle off all over again, with some variations like the rare festival, social cut scenes, or weather.

The goal is to make a ton of money and upgrade your farm. Unlike previous games, crops are NOT good moneymakers. Money making relies on milk from cows, eggs from chickens, fruits from trees, and fishing. Crops serve mainly to be ingredients in the many dishes you can cook. Dishes are good for restoring stamina and are always good presents to get people on your side. With money, you buy more seeds, new equipment, items that can be used as gifts, and upgrade your farm by building new rooms like the food processing room.

The game is divided into chapters. In between each chapter, an untold amount of years pass. By the next chapter, everyone ages, people move out of town, people move into town, some people even die. Because of this, the game is about 30 years long, but you only get to play 10 of these years. One year is 4 seasons. One season is 10 days. One day is 20 minutes.

Here is how the chapters break down. 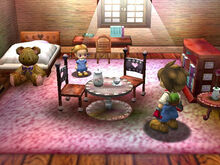 As time passes, characters can change.

Unlike some other Harvest Moon games, it is completely necessary to get married in the game to progress. You must be married by the end of Chapter 1 or else you cannot continue and the game will end. You have only 3 options for marriage:

Because of the early marriage deadline, the focus of the home-life shifts from getting a wife (like previous games) to raising a child. The personality and appearance of your son depends on which girl you marry. (In the Special Addition version, for the PS2, you have the option of having a daughter, but she will look the same no matter who you marry and her personality will be exactly the same as if she were a boy). Your son shows up in Chapter 2, which takes place years after Chapter 1. The interests and future careers are affected by the mother. For example, Celia's son will be inclined to be a farmer, while Nami's son will be inclined to be an artist. The type of friends you have and toys your son plays with will also sway his future career. Eventually, in the later chapters, your son will get married too, to one of two possible villagers.