Haunter (ゴースト, Gōsuto, Ghost in original Japanese language versions), based on a poltergeist, is one of 493 fictional species from the Pokémon franchise. The name Haunter literally means 'one that haunts'--exactly what this Pokémon is. In the beta versions of Red/Blue, Haunter was originally going to be called Spectre (as the third edition of the Nintendo Official Magazine Pokémon Special revealed).

Haunter takes the shape of an angular floating face with disembodied hands, somewhat like Rayman. It has a sinister look, complete with fangs and claws. However, when approached by people, it has a habit of reverting to a spherical form that obscures its eyes, mouth, and hands (as seen in Pokémon Snap). In this state, the attack Foresight can reveal it. Haunter is considered in the Pokédex to be a 'gas type' Pokémon, because of the overall structure of his body. Because of its ability to slip through block walls, Haunter is said to be from another dimension. They seem to eat by first paralyzing their opponent with Lick, then draining a bit of their life force, although it's possible they may eat other food as well, such things like Pokéblocks. It is also said to eat people's dreams by going inside them and scaring them to death.

In total darkness, where nothing is visible, it lurks, silently stalking its next victim. Its tongue is made of gas, yet by licking, it can sap its victim's life. It causes shaking that will not stop until the victim's demise. On rare occasions, after a windy night, a Haunter may be seen trapped in the day's shadows.

Haunter can be obtained by evolving from Ghastly at level 25. Haunter can also be found in Lavender tower in Pokémon Red, Blue, Yellow, Fire Red and Leaf Green. It is rare and can only be detected with the Silph Scope.

There are two ways to obtain a Haunter in the Gold and Silver versions. One is to capture a Gastly from Sprout Tower and evolve it into a Haunter, the other to capture them in a small patch of grass west of Lavender Town at night. In Crystal, Gastly can also be caught directly south, east and west of Violet City, where the Sprout Tower is located.

Haunter is an upgrade to Gastly statistically, giving it a very good Special Attack rating, but it is not seen in the competitive metagame because it can be evolved and upgraded further into Gengar.

Haunter are also found in the Nintendo 64 game Pokémon Snap in the Tunnel Course. They appear as small, purple balls flying around certain areas in circles; one must photograph these balls to see Haunter fully displayed on the pictures.

Like Gastly and Gengar, in Pokémon Ranger, Haunter can sneak up from behind and take a player's Pokémon's spirits away if they are caught in its trance.

In Pokémon Diamond and Pearl, Haunter can be found in the Turnback Cave, the same area where the player can capture the legendary Pokémon Giratina and in the Lost Tower. Players can also trade a Medicham with a non-player character in Snowpoint City for a Haunter named Gaspar, which does not evolve into Gengar as it is holding an Everstone.

Haunter has appeared in the anime several times. Its most notable appearance was in the consecutive episodes The Tower of Terror and Haunter versus Kadabra, in which Ash Ketchum tries to get a friendly, but unreliable Haunter to help him defeat Sabrina. The Haunter is caught in Lavander Town, and stays with Sabrina in Saffron City. Just outside Saffron City, is a town called Lavender Town where Haunter lives in a tower with Gastly and Gengar. Another Haunter was also seen with Gastly guarding a pirate ship. Since then, Haunter has made lesser appearances in the series, usually accompanied by Gastly and/or Gengar.

Another one is owned by Morty, the Ecruteak City Gym Leader.

Something to note: the Haunter in "Tower of Terror" and "Haunter versus Kadabra" doesn't seem to like fighting, and instead wins by joking around (bouncing his eyes on his tongue, blowing itself up with a large cartoon bomb) until Sabrina starts to laugh and regains control of herself. He seems overly sensitive, reacting too broadly at times to certain reactions (such as crying profusely after he licked and subsequently paralyzed Misty).

Haunter also appears in the episode "Fear Factor Phony", being part of a group of Ghost Pokémon at loggerheads with a group of Psychic Pokémon living nearby. Interestingly, the Ghost Pokémon band together to form a gigantic illusion in the form of a Haunter to scare other people and Pokémon away. In the English version of this episode, this illusion of Haunter can be heard saying "Gōsuto!" (which is the romanization of its Japanese name "Ghost") instead of "Haunter!".

Something else interesting to note is that in "Tower of Terror", Haunter has the ability to take a creature's soul from their body (and turn them into a ghost)as it does with Ash and Pikachu, regardless if they were killed or not. It was unknown if Ash and Pikachu were killed or unconscious, but Haunter returned them to their lifeless bodies and they awoke, but Misty and Brock were shaking them.

It is worth noting that Ash's haunter has not made an appearance since the first generation.

In The Electric Tale of Pikachu, a giant Haunter called the Black Fog is terrorizing the area around Saffron City and Lavender Town. Sabrina, the Saffron Gym Leader, joins up with a group of hunters to stop it, but has her soul drained by it. Ash and Brock then help capture it, after Ash gives them the idea to construct a giant Poké Ball to contain it. The trap nearly works, but the Black Fog uses Explosion to destroy it. Ash chases the weakened ghost into an ancient shrine, and tries to capture it with a Hyper Ball, but the Black Fog, once worshiped as a god long ago, is too proud be captured by a human, and destroys itself with Self-Destruct. 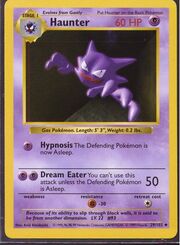 Haunter has also appeared on 11 trading cards, always as a psychic Pokémon. As a middle evolution, it is usually an uncommon Pokémon, as it is in Base Set, Base Set 2, Gym Heroes, Gym Challenge, Neo Destiny, Legendary, Expedition, and EX Fire Red & Leaf Green. However, it is common in Skyridge, and Rare and Rare Holographic in Fossil.

In the Gym sets, it is owned by Sabrina.