Hedgewars is a turn-based free and open-source artillery skill game. It is cross-platform and runs on FreeBSD, Linux, Mac OS X, Microsoft Windows, iOS and Android. It features a single-player mission/tutorial mode, in addition to multi-team multiplayer gameplay.[1]

Teams are composed of pink hedgehogs, which can be customized with different voices, gravestones, forts, and hats. Names of teams and individual hedgehogs can be changed as well.

Each hedgehog starts with a certain amount of hitpoints, which may be reduced with a variety of weapons. Hedgehogs die when they enter the water or their hitpoints are reduced to zero. Under normal game rules, a player wins when all hedgehogs on opposing teams have been eliminated, though it is possible to create custom rules.

Each hog can move as much as necessary within the turn timelimit. Movement controls include:

Players can also modify these controls as well. 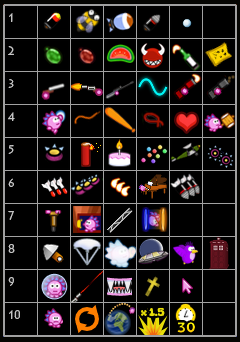 Numerous weapons and utilities are at the player's disposal. Hedgewars includes artillery-genre classics (such as grenade, bazooka, shotgun), but also features a host of other weapons unique to it alone.[2] The weapon set is customizable through the settings menu, allowing players to choose which weapons are available, and in what quantities. Many weapons cause explosions that deform the terrain, removing circular chunks.

Weapons cause a range of damage to hedgehogs based on the weapon used and how hedgehogs are hit. Damage dealt to attacked hedgehogs is displayed when all movement on the battlefield has ceased. In newer versions there is also an option for an immediate damage display.

Explosives add another element to the gameplay. After planting or setting off an explosive, a hog has a certain amount of time to get away. This is sometimes a challenging problem in landscapes with hard-to-reach areas.

Aside from weapons, there is a multitude of utilities available to the player. Some, such as the rope and teleporter, give greater map mobility. Others, such as the TimeBox, allow the player to remove his or her hog from the game and retrieve it at a random point in the future.

The landscape is an island floating on a body of water, or a restricted cave with water at the bottom. Starting with 0.9.10 the auto-generated maps can be changed in size or customized with map templates.[3]

In additional to randomly generated, themed maps, there are also custom-drawn maps available. Maps can be created by players with any editor capable of producing .png files.[4]

In the 0.9.15 release, a basic map editor was added, allowing players to draw their own maps from within the game.

Several players can play together, typically each using one team. The game can be played in tutorial mode, against an AI team, locally against another player on the same computer, or online via either LAN or the official server on the Internet (providing all players uses the same version of the game).[5] As of 0.9.15, Hedgewars also includes a variety of scripted modes and missions, allowing variant gameplay such as Capture the Flag, Control the Point, Random Weapons, and so on. Fort Mode also allows you to utilize your hedgehog team's fort design.

Hedgewars, although not as popular as other artillery games, has carved out a niche. The number of downloads on gna.org recently has been greater than that of Warmux.[6]

Hedgewars is a widely-recognized FOSS project, with many contributors worldwide. The project has participated in the 2011 and 2012 Google Summer of Code and Google Code-In, both open source community involvement programs.

Hedgewars supports most desktop and many mobile operating systems, including:[10]

Hedgewars is developed in a variety of programming languages, including:[11]

The graphical interface is written using SDL and Qt libraries.[12]

Hedgewars has a small, but dedicated team of contributors. Major developers include:[13]