Heracross(ヘラクロス, Herakurosu, Heracros in original Japanese language versions) is one of the 493 fictional species of Pokémon from the Pokémon Franchise – a series of video games, anime, manga, books, trading cards and other media created by Satoshi Tajiri.

Heracross is a beetle-like Pokémon, clearly modelled on the Japanese Rhinoceros Beetle. The name Heracross is a derived from the hercules beetle and the suffix -ceros, meaning horn. It could also be a reverse on the word cross-hair.

Heracross is a large, beetle-like, winged bipedal insect. Its entire body is blue. It has a capsule-shaped thorax similar to Pinsir's, a pair of yellow eyes and two clawed arms and feet. Although they are not directly related, they do often have close numbers on Pokédex lists. Growing from its head is a large T-shaped horn, which is flanked on either side by a smaller antenna. Starting with Pokémon Diamond and Pearl, the end of female Heracross' horns are somewhat heart-shaped.

Heracross is a powerful but docile Pokémon. Its natural habitat is forests and its diet consists of tree sap, nectar and honey. Its strength is such that it can topple large trees if it so wished.

Heracross is endowed both defensively and offensively, giving it excellent protection against potential predators. Its body is entirely covered in a shell as hard as steel, which wards off many attacks. Heracross's main weapon is its large horn, of which it is particularly proud. However, it only uses it in the wild to deter its foes, not hurt them.

To chase off intruders, Heracross tends to charge at them in a straight line, diving beneath them, scooping them up by thrusting its horn under their belly, and finally flinging them away with considerable force. Thanks to its power, Heracross can easily lift in this way foes a hundred times heavier than it is (5400 kg). It keeps a steady footing while doing this by planting its claws into the ground or a tree trunk.

In Pokémon ruby heracross' pokedex data said: " Heracross charges in a straight line at its foe, slips beneath the foes grasp, and then scoops up and hurls the opponent with its mighty horn. This pokemon even has enough power to topple a massive tree"

In Pokémon Gold, Silver and Crystal, Heracross could be encountered by using the Headbutt move on trees in mountainous areas of the Johto region. In Pokémon Ruby and Sapphire, Heracross are located in the Safari Zone. In Pokémon Colosseum, Heracross is a Shadow Pokémon and can be Snagged in Realgam Tower. In Pokémon FireRed and LeafGreen, Heracross are available in Pattern Bush. In Diamond and Pearl, Heracross sometimes appear after slathering honey on a golden tree.

As Heracross was first revealed it was assumed by some as part of the same evolutionary line as Pinsir due to similar body shape and size.

Heracross is considered a top tier Pokémon by competitive battlers. It has incredibly high Attack, and a high special defence stat. It's HP, Defence and speed are average (However with the item choice scarf heracross speed can become very high). It has a very low special attack stat but it is usually used as a Physical Sweeper. Its Guts ability, which raises its attack when it is inflicted with a status condition, makes trainers think twice before using a burn, poison, or paralysis-inflicting move.

Heracross was Ash's first Johto Pokémon and is one of the Pokémon Ash has used in his team. He caught it during Episode #121 (A Sappy Ending), after helping its swarm against a rival swarm of Pinsir, and taking out Team Rocket's Robot Pinsir (which was stealing all of the sap from the Pinsir swarm's trees). Heracross is a powerful Pokémon, but it is often distracted by the sight of trees, going over to them to suck their sweet sap. When in the presence of Ash's Bulbasaur, Heracross tries to feed off the nectar in Bulbasaur's bulb (because it's a flower bulb), much to the latter's frustration. Its most memorable battle was against a rival trainer's Scizor. Heracross proved victorious when the rival trainer was constantly forced to divide his attention between his computer and the battle, while Ash was able to focus solely on the match. Ash eventually left Heracross in the care of Professor Oak, where it has remained since. Ash however got it back to battle in the Johto League, in which it battled Gary's Magmar and won, but lost to Gary's next Pokémon, Blastoise. He also got him back in episode 441- Fierce Fighting! Jungle Battle at the Battle Palace, in which it battled Spenser's Venusaur and also tried to suck the nectar from the flower on Venusaur's back. However, Heracross lost that battle.

Heracross is voiced by Katsuyuki Konishi in all adaptations of Pokémon.

In the Pokémon Special manga, Heracross is first seen in Volume 7. While Silver is communicating with Blue, he stands in a full shot of Sprout Tower with a bunch of Johto Pokémon in the background, Heracross being one of them.

Heracross is later seen as one of the Pokémon under Bugsy's control. 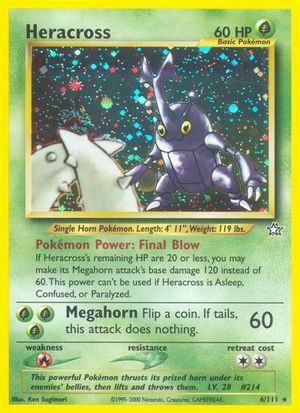 Heracross, like many other Basic Pokémon with no evolutions, is not overwhelmingly represented in the card game. It has appeared in all the following sets, in all cases Grass-type unless otherwise noted: