Heroes of Might and Magic II: The Succession Wars is a turn-based strategy video game developed by Jon Van Caneghem through New World Computing and published in 1996 by the 3DO Company. The game is the second installment of the Heroes of Might and Magic series and is typically credited as the breakout game for the series. Heroes II was voted the sixth-best PC game of all time by PC Gamer in May 1997.

An expansion pack, The Price of Loyalty, was released in 1997. Later, 3DO bundled Heroes II and its expansion pack in one box, released as Heroes of Might and Magic II Gold.

Heroes II added the Necromancer and Wizard factions, joining the Knight, Barabarian, Sorceress, and Warlock from the first game.

Heroes II introduced several new features that have since become standard for the series. First among them is the ability for heroes to gain special abilities. Each hero can possess up to eight different secondary skills out of fourteen available. Once gained, a skill can be developed from Basic to Advanced and Expert levels. For example, the Wisdom skill allows a hero to learn spells of level 3 and higher, while the Logistics skill increases the hero's movement ability over land. In Heroes I, heroes had a single fixed special ability according to their class.

The magic system was changed in Heroes II. Heroes I had used a memorization system in which each spell could be cast a certain number of times before being exhausted. Heroes II uses a magic point system that allows the player to apportion spell use as needed, while the varying point cost of different spells maintains balance.

Another major feature introduced in Heroes II is the ability to upgrade units, granting them improved statistics and, in some cases, important abilities. For example, upgrading Vampires to Vampire Lords enables them to absorb health and even to resurrect units. 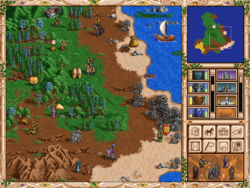 The canonical ending of Heroes I results in Lord Morglin Ironfist's victory. In the following years, he has successfully unified the continent of Enroth and secured his rule as king. Upon the king's death, his two sons, Archibald and Roland, vie for the crown. Archibald orchestrates a series of events that lead to Roland's exile. Archibald is then declared the new king, while Roland organizes a resistance. Each alignment is represented by one of the game's two campaigns. Archibald's campaign features the three "evil" town alignments, while Roland's campaign features the three "good" town alignments.

If Archibald is victorious, Roland's rebellion is crushed, and Roland himself is imprisoned in Castle Ironfist, leaving Archibald the uncontested ruler of Enroth. The canonical ending, however, results in Roland's victory, with Archibald being turned to stone by Roland's court wizard, Tanir. This event is referenced later in Might and Magic VI: The Mandate of Heaven, with Archibald eventually freed of the spell. 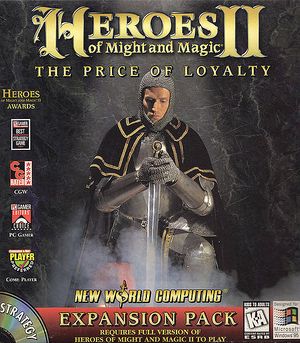 The Price of Loyalty box cover.

The Price of Loyalty is the expansion pack for Heroes II, released in 1997. Development of the expansion was contracted to Cyberlore Studios. The expansion adds four new campaigns, new artifacts, new creatures, new scenario maps, new in-map buildings and an improved map editor. The expansion also added a new structure for the necromancer faction - the shrine which enhances the heroes ability to raise the dead.

A common complaint about the expansion was the inclusion of a recruit building (Barrow Mounds) for ghosts. Since all units killed by ghosts themselves become ghosts, players were able to quickly gain invincible armies of ghosts that destroyed the game balance.

The Price of Loyalty was not released for Macintosh, nor was Heroes II Gold.

Heroes of Might and Magic II was the best-selling game for over 12 months in parts of Russia and Europe. The Price of Loyalty enjoyed similar success in those regions. The game sold very well in general, picking up critical awards as well.