Heroes of the Pacific

Heroes of the Pacific is an "Aerial Combat Action" game released for PC, Xbox, and PlayStation 2 consoles in late 2005.

The game has 5 initial training missions to get you started, a full-fledged campaign, 5 special "Historical" missions, an online feature, and an unlimited "Instant Action" feature. The game spans the entirety of the Pacific Theatre, and includes over 90 realistic aircraft. There are 4 different difficulty levels, controllable wingmen, a workshop to customize aircraft settings such as gun harmonization and bomb loadout, cinematic replays, and an impressive graphics engine.

There are several different game modes available in this game, including a standard campaign mode, online mode, and individual missions. 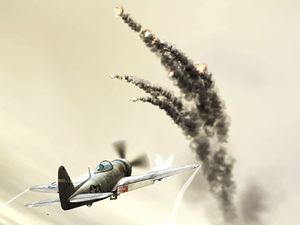 The campaign places you into the 1940s as William Crowe, a new US Navy pilot. After a brief training session, Crowe is posted to Hickam Air Force Base, better known as Pearl Harbour. The campaign officially begins here, on December 7, 1941; the day Japan attacked Pearl Harbour.

The campaign spans almost the entirety of the Pacific Theatre of World War II. From your desperate beginnings at Pearl Harbour, all the way to the taking of the island of Iwo Jima, the campaign has 26 missions divided into 10 different theatres such as Midway or Wake Island.

Besides following the plot of the United States versus Japan, the story interweaves more personal plots within the story. Crowe wishes nothing more than to avenge his brother's death, and a smaller plot twist involving sabotage on an aircraft carrier also attempts to keep the storyline interesting.

As you progress through the main campaign, 5 special Historical missions become available for you to try. These are based on actual missions taken place throughout the war. These take place separately from the campaign.

The game can also be played as individual skirmishes, allowing you to play any one of the campaign's missions as well as open-ended "Instant Action" missions.

There are 5 initial training missions that allow you to practice basic combat and flight skills before attempting the other game modes. Although the game is more action-oriented than pure flight- simulation, the game's flight characteristics are very realistic and the training missions are very useful.However the controls SUCK.

Multiplayer includes a split-screen, 2 player mode for consoles and an online skirmish mode for both consoles and PC. The online mode includes several different games like capture the flag and one-on-one dogfights. Unfortunately, the game doesn't particularly lend itself well to online play and as such, finding opponents to play with can be a tad difficult sometimes.However the controls SUCK. 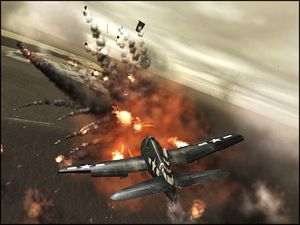 The explosions and the aircraft themselves are beautiful

The game features impressive graphics. The engine can handle over 150 aircraft on screen at one time without any obvious slow-downs. The explosions and lighting are quite impressive, as is the detail on the aircraft themselves. Some things aren't quite as good; the water textures leave a little to be desired (luckily you won't be spending a lot time staring at it), many of the land-based items can be unimpressive when close-up, and the cockpit view is fairly simplistic.

But there are many things the game does right - volumetric, beautiful clouds being one of them. It's not something you'll necessarily notice, but compared to how many games poorly accomplish cloud and fog, this game does it beautifully. Trees are done well considering the jungle climate you're playing in, and the exterior of the aircraft are quite impressive. The flak explosions are spot-on, and it becomes a job in itself trying to aim while the explosions knock your aircraft all over the place.

The audio in this game is also impressive. The sounds of the engines are accurate and well-done. The machine guns offer a nice staccato sound, while the cannons have that perfect "punch" to them. The sounds of war give a nice ambience during dogfighting; when rounds hit your aircraft they sound perfect (and frightening) and the flak cannons and AA guns are equally as menacing. The voice-acting through the missions and in the cut-scenes are also well done.

The campaign, as well as all other missions, can be attempted on one of four possible difficulty settings, ranging from Rookie, to Pilot, to Veteran, and finally Ace. The difficulty settings mostly adjust AI skill, but also affect smaller parameters like the speed in which your guns will overheat. Finally, the difficulty setting determines the amount of upgrade points you receive for completing a mission (See Aircraft - Upgrades below)

Wingmen are also available on most of the missions throughout the game. Their control is simplistic - pressing one of four directional buttons allows you to tell them whether to break or hold formation, or attack/defend a specific (or group of) targets. Their effect is sometimes subtle, but unlike many games, your wingman do seem to do some good. Huge dogfights can erupt and your wingman are quite competent at taking quite a few enemies.

There is also two different control settings, an "Arcade" and "Professional", depending on what level of control you wish to have over your aircraft. The Professional controls allow better control over your aircraft (particularly during dogfighting) but it can be difficult to keep in the air sometimes. Alternatively, the Arcade controls offer a more simplistic but less-detailed approach to flying.

Ah, the stars of the show. The aircraft are the focus of the game, and it certainly shows. The selection of the aircraft within the game is expansive and accurate. The aircraft are introduced through the campaign in a historically-accurate timeline. You start with the P-40 Warhawk and slowly work your way up as aircraft designs improve. Unfortunately, your enemies also benefit from better aircraft on their side as well.

Special "Bonus" aircraft can be obtained by completing an entire theatre on the hardest difficulty setting. As well, once you finish the campaign, you have the ability to fly all the aircraft your enemy has. This lends itself well to extended replayability of the campaign and other missions.

Another neat feature of the game is aircraft upgrades. Most of the aircraft in the game can be upgraded at least once, if not a few times, to newer and more effective models. Each upgrade costs a certain number of "points" that can be accumulated by playing through missions. The difficult setting also helps determine the number of points gained.

Once you've chosen a plane for a mission, you can also "tweak" a few settings on the aircraft before you fly. These settings range from your bomb loadout or cannon/gun configuration, to the harmonization of your main guns. One particularly useful feature is the ability to set your gun sights to "ground attack" mode. This aims your guns at a slightly downward angle as opposed to directly forward. This becomes a huge advantage when attacking ground targets, allowing you to stay flying while you attack your targets rather than executing fast, numerous dives at your target.

The aircraft in the game are divided into four categories: Fighters, Dive Bombers, Torpedo Bombers, and Heavy Bombers.

Although this isn't actually a huge spoiler of the game, many people enjoy being surprised by the hidden and bonus aircraft they can come across, or want to wait and see the aircraft progress historically throughout the campaign. If this is the case, please forego reading the below.

PBY Catalina B-26 Marauder B-25 Mitchell