Hitmonchan (エビワラー, Ebiwarā, Ebiwalar in original Japanese language versions) are one of the 493 fictional species of Pokémon creatures from the multi-billion-dollar Pokémon media franchise – a collection of video games, anime, manga, books, trading cards and other media created by Satoshi Tajiri. The purpose of Hitmonchan in the games, anime and manga, as with all other Pokémon, is to battle both wild Pokémon, untamed creatures encountered while the player passes through various environments, and tamed Pokémon owned by Pokémon trainers.

Hitmonchan's name is a combination of hit (suggesting its role as a martial arts pokémon), mon (a common abbreviation for 'monster' in various collectible monster games—such as Digimon and Pokémon), and chan (an allusion to actor and martial artist Jackie Chan). Its Japanese name is a reference to world champion boxer Hiroyuki Ebihara.

Hitmonchan is a moderately-sized humanoid monster adorned with two big red boxing gloves on its hands. It is unknown if these are simply man-made gloves that it refuses to take off or if they are actually Hitmonchan’s physical hands. As well as its signature boxing gloves, it can be identified by its two large shoulder pads, a light-purple tunic, a black belt around the waistline, lavender shoes, and the crest on its head. Hitmonchan is a solely male species. It cannot breed with its own species.

As one would expect, Hitmonchan’s boxing fists are its most notable characteristics. They are capable of amazing offensive measures and can be very versatile against any target. It is capable of a wide array of punching frequencies and strength, including volleys of punches so rapid that they are faster than speeding bullet trains and are but mere blurs to the human eye. This near-invisible rapid-fire assault is even more amazing when considering that Hitmonchan tends to appear to stand idly as it is attacking a target in front of it.

Hitmonchan’s punching ability is by no means restricted to light, rapid attacks. Just before making contact, Hitmonchan will spin its arms to increase the power of any punch it throws. By spinning the right arm, it can punch with the force of a boring drill, and with this comes the capability to punch through a solid slab of concrete. Also, since both its speed punches and power punches exert so much energy, they are capable of quite literally burning the target; the punches can slice the air as well.

Hitmonchan is empowered to use its punching action by an indomitable spirit and refusal to give up in the face of adversity. In fact, it is widely said that it possesses the fighting spirit of a professional boxer working towards the world championship. The only thing that works against this image is its need for a five-minute break after each fight.

Its ability is Keen Eye, which prevents its Accuracy from being lowered in battle. With the release of Diamond and Pearl, Hitmonchan has gained an exclusive ability called Iron Fist, which increases the power of all of its punching moves by 30%; there are ten punching attacks it can learn that will be powered up. As a result, Hitmonchan could possibly be an excellent subpuncher(combining substitute with Focus Punch) because before the STAB attack bonus, Iron fist causes Focus Punch to have a 195 base attack, where normally its at 150.

Hitmonchan's attacks have been heavily revised in the various games. However, as its type may suggest, the majority of its moves have been punches: in alphabetical order, it can learn Comet Punch, Dynamicpunch, Fire Punch, Focus Punch, Ice Punch, Mach Punch, Mega Punch, Sky Uppercut, and Thunder Punch (as well as the new moves Drain Punch in Diamond and Pearl). Strangely enough, there is a punching attack that is inaccessible to Hitmonchan: Dizzy Punch. The only exception was in Pokémon Crystal, where it was possible to obtain a Tyrogue that knew Dizzy Punch through the Odd Egg; however, the move isn't available to Hitmonchan in later games. Another move that may be hard to get onto a Hitmonchan is Dynamicpunch; it can't learn it by the means of breeding or level-up, but can be taught the attack by the move tutor in Mossdeep City in Pokémon Emerald.

It is not recommended that Fire Punch, Ice Punch, or Thunder Punch should be used on Hitmonchan in any version prior to Diamond and Pearl due to its poor Special Attack stat, though the moves could be used for breeding. However, because of the new "Physical" classification of Thunder Punch, Fire Punch and Ice Punch, these attacks may well become an important part of its arsenal, particularly Ice Punch and Thunder Punch, as both these are very effective against Flying types, which Fighting types are weak against. Additionally, Icepunch and Thunderpunch form a common combo called "BoltBeam", named after Thunderbolt and Icebeam. It can hit all mono-type pokemon for at least neutral damage, as well as hit 5 types for super-effective damage: Water, Grass. Ground, Flying, and Dragon. Only a few pokemon resist the combo.

It is said that Hitmonchan can only use punching attacks, but it is possible to get one with High Jump Kick, the only kick it can possibly gain as of yet. One must be bred from a Ditto and Hitmonlee (the latter of which must know the aforementioned move).

Hitmonchan's first appearance was in Episode 29 (The Punchy Pokémon) under a trainer named Anthony; it was a combatant in the P1 Grand Prix, but lost due to cheating by Team Rocket. It also showed up in the short Pikachu's Summer Vacation and the movie Pokémon 2000.

Hitmonchan's first major appearance in Advanced Generation was in Pasta La Vista, where May was lent one for a battle to decide a family matter in the passing down of a local fighting dojo. Hitmonchan successfully beat a Breloom in a practice match, but nearly got knocked out by Ash's Hitmonlee before Team Rocket made an interference in the fight. In the end, the match seemed equal and would've ended as a tie, as the break-in occurred right before both Pokémon launched their most powerful attacks, Focus Punch.

Bruno has a Hitmonchan in Pokémon Special, which is capable of using Fire Punch, Thunder Punch and Ice Punch at high calibre. Bruno remarks that Hitmonchan is like having three Pokémon in one.

Crystal is later seen with a Hitmonchan in her capture team, who is capable of blindingly fast punching attacks. 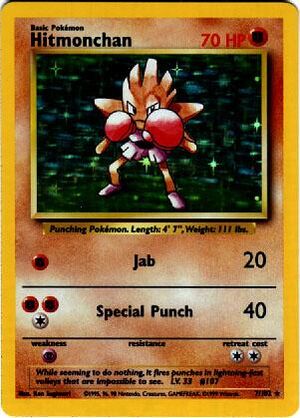 Hitmonchan, as seen in the Pokémon Trading Card Game

For a Fighting-type Basic Pokémon, Hitmonchan had a large amount of battling prestige on the card battlefield, especially as a staple in the Haymaker deck in the early stages of the TCG. It is on the following cards: